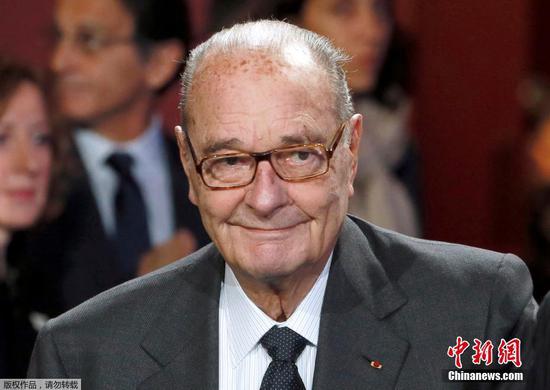 Jacques Chirac, the former French president, has died at age 86, his family announced on Thursday.

The center-right politician, who developed close ties with China and was a champion of a united Europe, was prime minister under socialist former president Francois Mitterrand for two years before being elected as the 22nd president, from 1995 to 2007.

He took France into the eurozone and survived an assassination attempt at the 2002 Bastille Day military parade, but his authority was undermined after the French rejected the proposed European constitution in a 2005 referendum. In 2011, he received a two-year suspended prison sentence for corruption during his time as mayor of Paris in the 1970s.

Chirac had close ties with China, having visited numerous times as president and also after his retirement, and was known as a great lover of Chinese poetry.

"Never in the long history of France-China relations have our communications been so close, our mutual trust so deepened and high-level contacts so frequent," he said before his final presidential visit, in 2006.

Chirac was famed for changing his position on major political issues, including European Union, leading to one of his nicknames, La Girouette, the weather vane.

Having been a Eurosceptic in earlier days, when his ambition earned him another nickname, Le Bulldozer, Chirac became a strong believer in European federalism. When the single European currency was launched in 1999, he said it was "much more than just a means of payment. It has a symbolic dimension. With it the Europeans will be stronger, more united."

Mina Andreeva, a spokeswoman for European Commission President Jean-Claude Juncker, said, "Europe is not only losing a great statesman but the president is losing a great friend." She added that Juncker wanted to "pay tribute and honor his extensive lifelong work, and his legacy for France and the European Union will stay with us forever".

One reason for Chirac's support for a united Europe was as a check on the increasing influence of the United States, in particular regarding the US-led invasion of Iraq in 2003, but his opinions were not universally popular, causing a split with then-British prime minister Tony Blair and upsetting the states of the former Eastern bloc that joined the European Union in subsequent years.

In 2005, Chirac supported the proposed new European constitution, which was rejected by the French in a referendum. He complained, "If you want to shoot yourself in the foot, do it, but after, don't complain. … It's stupid, I'm telling you," seriously undermining his authority.

Bill Carmichael, leader of the International Public and Political Communication MA course at the University of Sheffield in the United Kingdom, said Chirac leaves a significant but flawed political legacy. "I think he will be seen as a political change-coat who lacked any deep convictions. He became a champion of EU integration, but perhaps pushed the French people too quickly, leading indirectly to the rise of the more Eurosceptic National Front," he said.