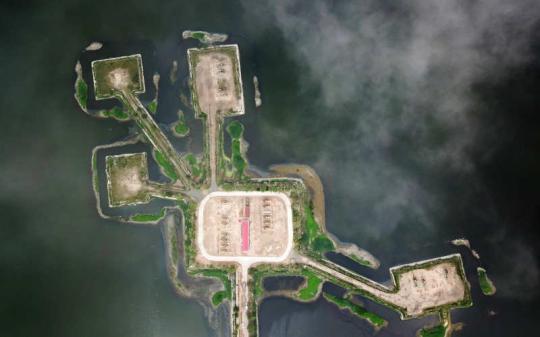 Xi, also general secretary of the Communist Party of China Central Committee and chairman of the Central Military Commission, made the remark in a congratulatory letter to honor the 60th anniversary of the discovery of the oilfield in Heilongjiang province.

Oil workers and geologists found the oilfield after great hardship 60 years ago, opening a new chapter of historic significance in China's oil exploration and development history, Xi said in the letter.

Daqing, the city where the oilfield is located, got its name in 1979.

Over the years, Daqing's residents have remained hardworking and enterprising, generation after generation, and built the country's largest oil production center in a wilderness area, he said.

The oilfield's contributions are engraved on a monument to the motherland, with the spirit of Daqing and a model worker known as Iron Man becoming important parts of the great spirit of the Chinese nation, he said.

Iron Man was a nickname of Wang Jinxi, an oilfield worker who led Drill Team No 1205 and devoted his life to the development of the petroleum industry.

Xi called on the oilfield staff to stay true to their original aspirations, keep their missions firmly in mind and continue to give play to the Daqing and Iron Man spirit.

He expressed hope that the oilfield would make new and greater contributions to realization of the "Two Centenary Goals" of national prosperity and the Chinese dream of national rejuvenation.

The State Council also sent a congratulatory letter, calling for the oilfield to continue to deepen reform, lower costs and improve efficiency to ensure the security of the country's oil and gas supply.

The oilfield produced close to 2.39 billion metric tons of crude oil in the past six decades.