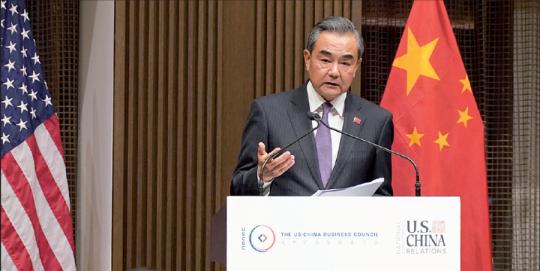 Stressing the importance of multilateralism and the central role of the United Nations, China's top diplomat voiced on Tuesday the country's support for global cooperation in achieving sustainable development.

"Development is mankind's eternal pursuit. Leaving no one behind is our shared responsibility," Wang Yi, special representative of President Xi Jinping, said at the High-Level Political Forum on Sustainable Development at the UN in New York.

The forum is a part of the two-day Sustainable Development Goals Summit held during the UN General Assembly.

Wang, state councilor and foreign minister, urged world leaders at the summit to take to heart the concerns of developing countries and ensure coordinated economic, ecological and social development to realize their sustainable development goals.

The 17 goals, adopted by all UN member states in 2015 as the 2030 Agenda for Sustainable Development, laid out a blueprint for global peace and prosperity for people and the planet.

"The 2030 Agenda for Sustainable Development has opened a new chapter in development cooperation around the world," Wang said.

China has made its mark in facilitating global cooperation, and Wang said the country aims at promoting development for all through greater openness and collaboration and building a community with a shared future for mankind.

The country will continue to pursue cooperation on the Belt and Road Initiative and scale up South-South Cooperation, he added.

China has also made achievements in its development. It has identified sustainable development as a fundamental State policy and is taking comprehensive measures to implement the 2030 Agenda, Wang said.

The country is now at a new starting point for development as it celebrates its 70th birthday, according to Wang, and it is committed to complete the building of a moderately prosperous society in all respects by next year.

China expects to eradicate domestic absolute poverty by next year. In 2017, almost all primary and middle school students finished their studies in China, beating the global average, Wang said.

The country is extending medical insurance to the entire population, and its maternal mortality rate of 1.83 deaths per 10,000 live births in 2018 has achieved the goal a decade in advance.

New afforestation coverage in China accounted for 25 percent of the global total from 2000 to 2017, Wang said.

Despite China's achievements, it is still a developing country that "faces a big challenge of uneven and inadequate development and lags far behind developed countries", he added.

Better lives for 1.4 billion Chinese will be "China's biggest contribution to global development", he said.

The country is placing its people's well-being front and center and embracing a new development philosophy featuring high-quality development that is innovative, coordinated, green and open for the benefit of all, Wang added.

He said a parallel to the 2030 Agenda, which represents a dream for a better future for the world, is the Chinese dream of national rejuvenation.

"China will work tirelessly with the rest of the international community to realize the sustainable development goals for 2030 and bring a better future for all," he said.

The summit aims to lead to a Political Declaration of Heads of State and Government that provides political guidance on how to step up the pace of implementation of the 2030 Agenda and sustainable development goals.