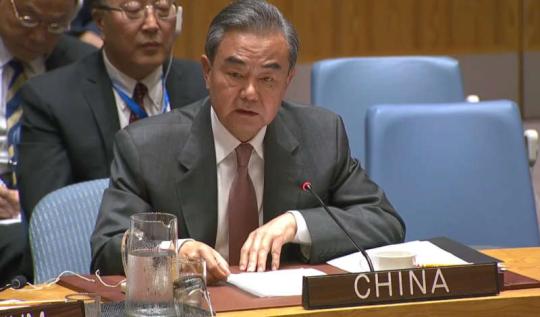 Wang spoke about preventive counterterrorism and de-radicalization measures that China has been taking in the western region of Xinjiang during a ministerial-level debate in the Security Council on cooperation between the UN and regional and subregional organizations in maintaining international peace and security.

The regional government of Xinjiang used other nations' practices in fighting and preventing terrorism in accordance with the law, said Wang. Such measures frequently have stemmed terrorist activities from taking place in large numbers, and protected the fundamental rights of more than 25 million Xinjiang residents to live and develop, he said.

According to Wang, China's efforts are endorsed by all ethnic groups in the region.

China is concretely implementing the UN's Plan of Action to Prevent Violent Extremism, and it is among China's most crucial contribution to the international fight against terrorism, he said.

In the fight against terrorism, there must be no double standard, Wang said, and all terrorist activities should be cracked down regardless of who is behind them, where they take place or why they are initiated.

Counterterrorism measures shouldn't be selective, nor should any party take advantage of terrorist forces to seek geopolitical benefits, he said, and terrorism shouldn't be related to a specific nation, people, or religion.

Wang reiterated China's opposition to the rhetoric of the US and some other Western countries' against China's legitimate actions in Xinjiang.

Those claims ignore basic facts, are oriented by political reasons, and wouldn't be agreed to by the international community, he said.