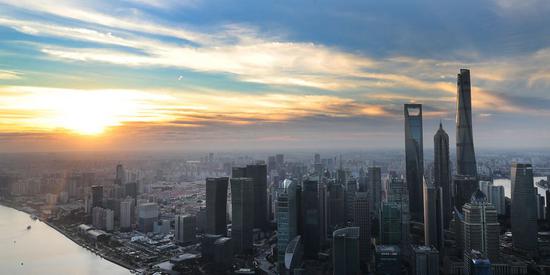 The view of the Lujiazui area in Pudong of Shanghai, east China, Nov. 1, 2018. As the financial center of China, Shanghai is a good example of the tremendous changes that have taken place in China since the reform and opening-up. (Xinhua/Fang Zhe)

"The reduction policies are so comprehensive that almost all taxpayers will benefit from the tax and fee cuts this year," Minister of Finance Liu Kun told a news conference.

During the period, taxes were reduced by a total of 1.17 trillion yuan. The private sector took 63 percent of the tax relief. In terms of industries, manufacturing enterprises got the lion's share and saw 364.8 billion yuan less duties levied, or 31 percent of the total tax reduction.

According to a survey on 311 enterprises conducted by the National Bureau of Statistics, over 70 percent of the funds released by the tax cut went to research and development, technical renovation, and expanding reproduction and reinvestment.

"The package of comprehensive cutting taxes and fees policies implemented this year has been well received as the most direct, effective and fair incentives to enterprises," he added.

For each day in the January-August period, there were 19,000 newly-registered companies on average, and investment in high-tech industries picked up to grow 13 percent year on year, the minister said.

"The main indicators of the first eight months showed that the Chinese economy had stayed within a reasonable range and achieved generally stable growth while making further progress," Liu said. "The tax and fee cuts have played an important role."

China aims to reduce the tax burdens and social insurance contributions of enterprises by nearly 2 trillion yuan this year, according to a government work report.

In 2018, the tax and fee burdens on enterprises and individuals were reduced by around 1.3 trillion yuan, according to the report.