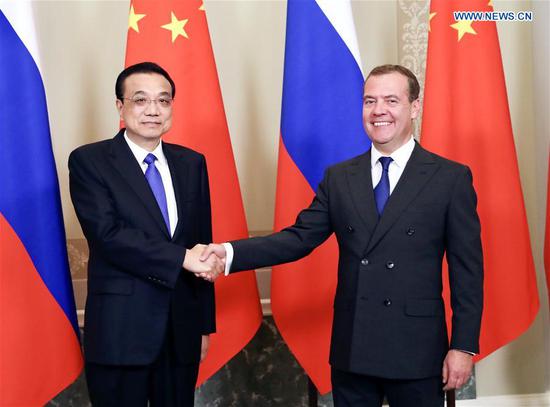 China welcomes cooperation projects from Russia in refining and chemical integration, and is ready to expand collaboration with the country in the aviation, high technology and cross border e-commerce areas, Premier Li Keqiang said on Tuesday.

Li made the remark in St. Petersburg as he and his Russian counterpart, Dmitry Medvedev, jointly met the media. The two prime ministers co-chaired the 24th regular meeting between Chinese and Russian heads of governments earlier that day.

After the meeting, Li and Medvedev signed a joint communique and witnessed the signing of a series of cooperative documents in areas including investment, agriculture, energy, e-commerce, technical innovation and digital economy.

China has been Russia's top trading partner for nine years running. Last year, two-way trade volume exceeded $100 billion for the first time, up by 27.1 percent year-on-year, and the new road map aims to double that volume within five years.

Speaking highly about his meeting with Medvedev, Li said China-Russia cooperation has been both pragmatic and comprehensive. The two countries are not only upgrading cooperation in traditional areas such as energy, but also working on new areas like e-commerce and technological innovation.

The two countries have agreed to establish a joint foundation in scientific research, catalyzing each other's advantages, particularly in basic research.

China is ready to work with Russia to foster stronger synergy of the Belt and Road Initiative and the Eurasian Economic Union, Li said.

This year marks the 70th anniversary of the establishment of diplomatic relations between Russia and China. Li said that as the world is faced with increasing economic and political uncertainty, enhanced political mutual trust and expanded pragmatic cooperation will not only benefit the two countries but also send positive signals of regional and world stability and prosperity.

Medvedev said China-Russia ties are at their best in history and Russia is willing to expand cooperation with China in high-tech areas such as artificial intelligence and robots.

Li began his three-day visit to Russia on Monday at Medvedev's invitation. He will also meet with Putin during the visit.