Redefining the rules of attraction(3)

Zhang Guoqing, mayor of Tianjin, said: "Nowadays, Tianjin is riding on the tide of the integrated development strategy among Beijing, Tianjin and nearby Hebei province."

To date, more than 4,000 projects worth 700 billion yuan have moved from Beijing to the coastal city.

The lower costs for businesses are pushing Tianjin up the rankings of Chinese cities with the best business environments, according to a survey by China Central Television late last year.

From 2017-19, company taxes in Tianjin were slashed by 105.7 billion yuan, with the Tianjin government cutting local taxes by 62.3 billion yuan.

Foreign companies are upbeat about Tianjin.

Airbus Tianjin General Manager Frank Schreiber said that Airbus has a lineup of A320 and A330 products in Tianjin.

The company will increase its assembly capacity of A320 planes from four to six per month next year, with the A350 expected to also join the Tianjin assembly line.

Schreiber said the Airbus and Tianjin partnership was a "win-win".

Timothy Stratford, chairman of the American Chamber of Commerce, said, "Since the 1980s, I have seen many foreign companies invest in Tianjin, and now about 180 US companies have businesses in Tianjin."

Qiu Zhongqiang, Procter &Gamble vice-president, said over the company's 25 years in Tianjin it had witnessed an improvement in legal protection for companies.

"The city has made resolute efforts and given support to cracking down on illegal and fake goods, accelerating the intellectual property rights protection," Qiu said. "The ever-improving business environment and measures have made it easy for companies to launch businesses in the city." 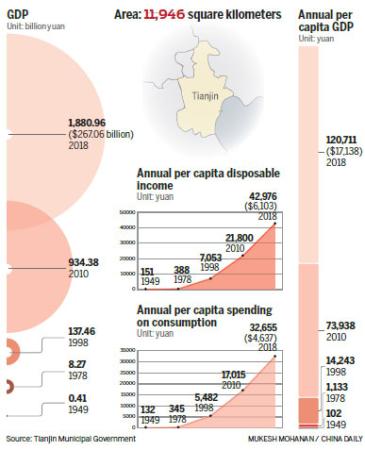