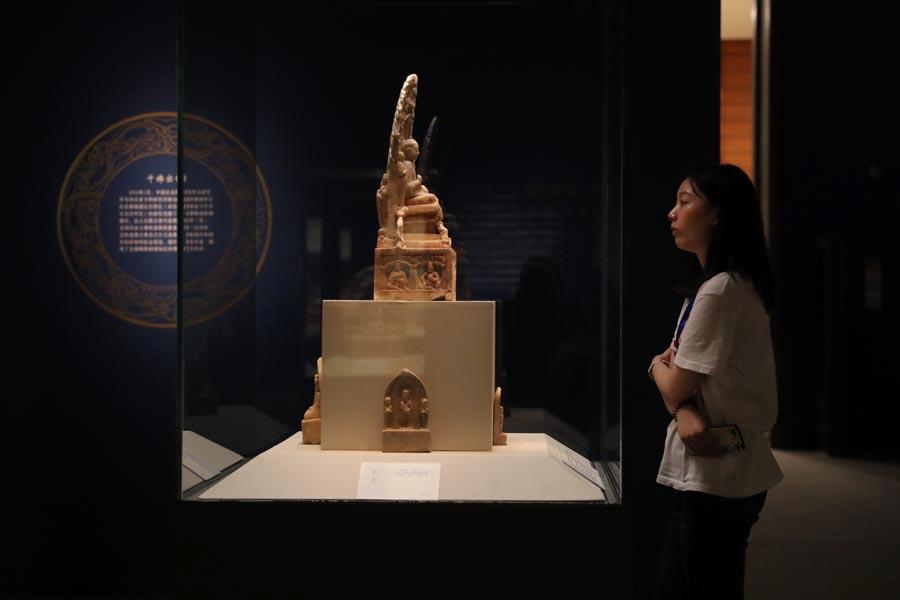 A visitor at the ongoing show, Peaceful Coexistence, at the National Museum of China in Beijing. It displays more than 120 Buddhist statues excavated from Yecheng, an imperial city of the Northern Qi Dynasty (550-577). (Photo/China Daily)

An exhibition of Yecheng relics recounts the development and decline of the former center of Buddhism in northern China.

Its glorious past less well-known today, the city of Yecheng in present-day Linzhang county in North China's Hebei province, was a sacred land for Buddhists in the sixth century.

Hundreds of temples scattered in and around the planned city, once played host to a great number of eminent monks from India and across China, as well as other sutra translators and ordinary practitioners of Buddhism. On the mountains that surrounded Yecheng there were more temples and caves with Buddhist statues.

The booming landscape raised the profile of Yecheng, an imperial city of the Northern Qi Dynasty (550-577), as a Buddhist center in northern China. But all of a sudden, its glory waned. The Northern Qi rulers were defeated by the rival Northern Zhou Dynasty (557-581), both from the Northern Dynasty (386-581) period.

Yecheng became part of Northern Zhou territory, with Chang'an (now Xi'an in Northwest China's Shaanxi province) as the capital, and the old city then saw persecution of Buddhists. Temples were demolished so that the land could be used for other purposes, monks were asked to leave, and Buddhist statues were smashed into pieces and buried underground. 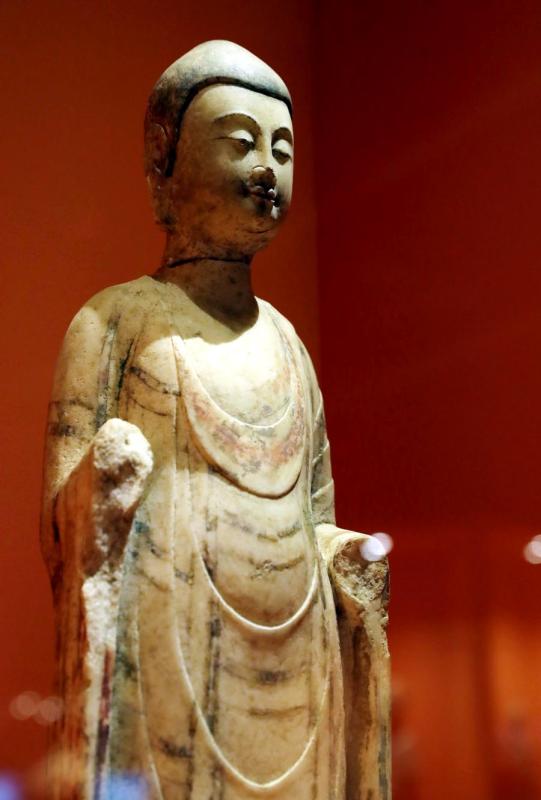 Yecheng's splendor was then forgotten, but in 2012 archaeologists working at its relics site found a pit where Buddhist statues were buried. In 16 days, archaeologists excavated nearly 3,000 pieces, both intact and broken, making the pit a discovery with the most buried Buddhist figures in China since 1949. (Photo/China Daily)

Today, people can have a glimpse of Yecheng's heyday, when it was a political and cultural center in northern China, by visiting Peaceful Coexistence, an exhibition at the National Museum of China that runs through Oct 6. It has more than 120 Buddhist statues, mostly dated between the fifth and sixth centuries, according to Tong Chunyan, a curator from the National Museum of China.

Tong says these works underwent restoration after being unearthed, and are now displayed for public viewing mostly for the first time.

The history of Yecheng can be traced to the Spring and Autumn Period (770-476 BC). It became the capital of the Kingdom of Wei ruled by Cao Cao, a warlord, in the early third century. And it served as the imperial city of several dynasties during the chaotic Sixteen States period (AD 304-439) and then the Northern Dynasty period, during which northern China saw the rise and fall of many short-lived sovereign kingdoms. 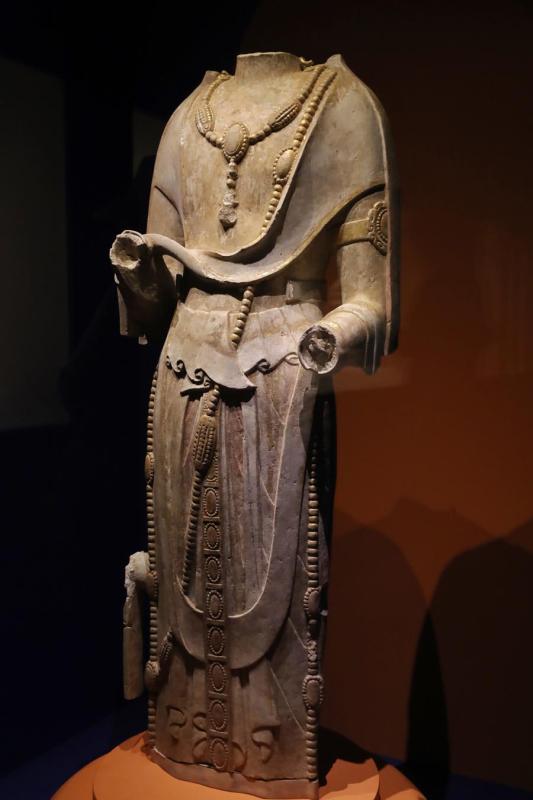 The political and military importance of Yecheng over a course of nearly four centuries also prompted its cultural landscape. (Photo/China Daily)

As Buddhism, generally believed to have been introduced to China from India some 2,000 years ago during the Han Dynasty (206 BC-AD 220), spread into the Chinese hinterland, Yecheng developed into a hub for Buddhists. It also attracted skillful craftsmen whose sculpting techniques contributed to a boom in Buddhist statues.

But after Yuwen Yong, an emperor of Northern Zhou, defeated Northern Qi to occupy its territory in AD 577, he soon initiated a suppression of Buddhism, because he believed temples had become too rich and powerful.

Emperor Wu, as he was known, ordered Buddhist images to be destroyed, the clergy to become either farmers or soldiers and told his officials to take over the temples' lands and distribute them among people for farming, according to He Liqun from the Institute of Archaeology who oversees the excavation and conservation of Yecheng's relics.

More than 30 years ago, an archaeological team was formed to continue excavations at the relics site of Yecheng, says Zhu Yanshi, deputy director of the Institute of Archaeology, under the Chinese Academy of Social Sciences, yet not a single Buddhist statue had been found until early 2012. 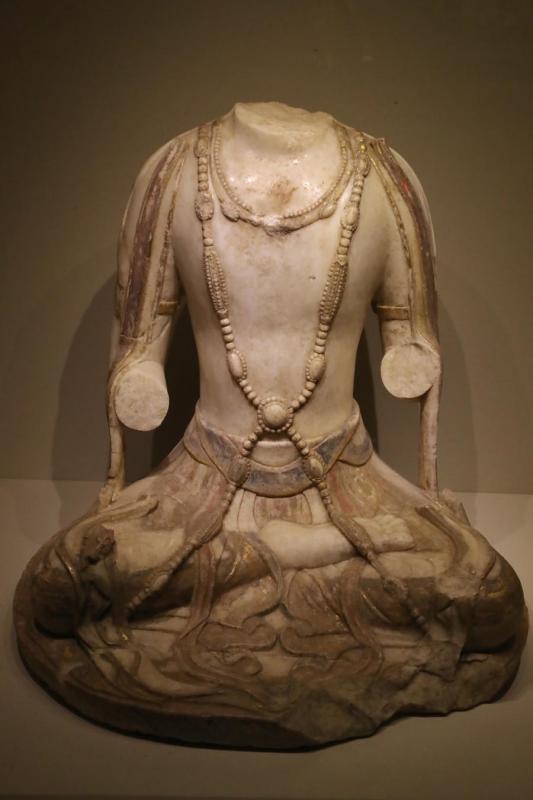 Zhu says the belated and yet productive discovery of the burial pit is "unbelievable", and that the initial cleaning and conservation of the figures found have been completed. It took researchers five years to stabilize the remaining fragile layer of gold that covers the statues' surfaces before they began to match broken parts. (Photo/China Daily)

"The process of putting the broken pieces together was like solving a puzzle. The researchers studied the components and remembered their shapes and the patterns drawn for months," Zhu says.

The statues, with sculpted back screens, are in two or three dimensions, making it more difficult to restore them than artifacts with flat surfaces such as ceramics, Zhu adds.

He Liqun from the Institute of Archaeology says the displayed figures demonstrate distinctive artistic features from India as well as Chinese cultural elements as Buddhism became part of the local life in Yecheng.

He says visitors to the national museum show can see two styles of Yecheng's Buddhist art.

"One is the layering patterns of the kasaya (Buddhist robes) vestments on the statues that look like ripples and appear delicate. They resemble the way clothes adhere tightly to a person's body when the person rises from the water. The style shows a direct Indian sculpting influence.

"Another style presents local Buddhists and craftsmen's creativity－when sculpting the back screen the Buddha sits against, they made it into a round shape of two intertwined banyan trees, and they crafted it into multiple hollowed-out layers to showcase refined patterns and sophisticated sculpting techniques." 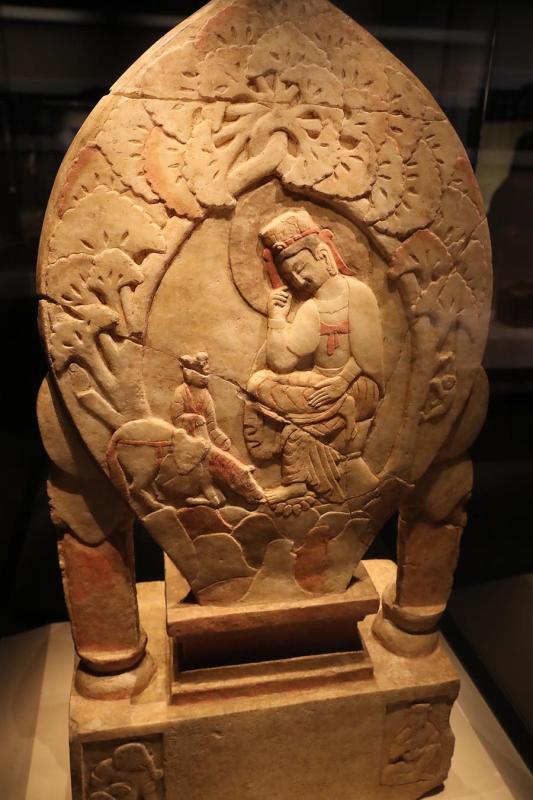 Zhu says the excavations at the Yecheng site meanwhile give a boost to the studies of urban development between the Han and Tang dynasties, helping people to clearly picture the layout of imperial cities from the Kingdom of Wei, the Sixteen States period and the Northern Dynasty. (Photo/China Daily)

He says Yecheng was smartly planned when Cao Cao began to construct it in AD 204. "It was symmetric in respect of an axis, and it was divided into districts for different functions. The new model laid a foundation for the later building of Chang'an of the Sui and Tang dynasties, and extensively influenced the layout of ancient capitals in China and even East Asia."