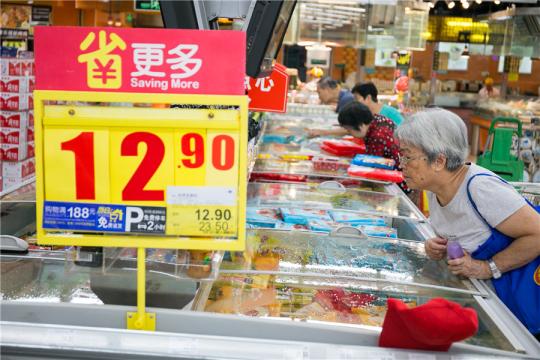 Demand for frozen food continues to grow in China as young urbanites have little time to cook complicated cuisines, due to hectic lifestyles and work-and life-related pressures, industry experts said.

The market for frozen food will likely see continuous growth, with the shut-in culture becoming more prevalent in cities, they said.

In the next few years, the market scale of frozen rice-and flour-based food like dumplings, glutinous rice balls, and traditional Chinese rice-puddings, in addition to frozen hotpot materials, frozen meat-, poultry-, fish - and vegetarian-based meals, will grow steadily, they said.

Convenient, quick-delivery food services are not preferred by all consumers, due to perceptions of health risks relating to unhealthy and unclean ingredients.

By contrast, frozen food is easy to cook. Frozen food varieties that do not have any preservatives have been more commonly used in family cooking. They satisfy the demand of people who would like to stay at home to eat, consultancy Frost &Sullivan said.

"Affected by the weather and eating habits, frozen food sees quite a different market performance in different seasons and areas. Frozen hotpot ingredients and condiments are most popular in fall and winter, and the busy season usually falls between August and January," said Neil Wang, president of Frost &Sullivan China.

In the past five years, the market scale by sales revenue jumped 57.6 percent. Now, China serves as the second-largest frozen ready meal market after the United States, according to data from market research provider Euromonitor International.

By 2023, the market scale of frozen ready meals, which don't require any cooking preparation other than heating, is projected to reach 28.5 billion yuan ($4.14 bil - lion) in China, adding 14 percent over the expected value of this year, Euromonitor International found.

"Cooking several dishes and complicated cuisines seems troublesome to me, as it requires a lot of time and energy. When I get home from work, it is usually already late, and I'd prefer to cook some easy and quick frozen food like dumplings if I hadn't eaten out or ordered food delivery," said Wang Zhipeng, a 35-year-old high school teacher who lives in Beijing.

Fujian Anjoy Foods Co Ltd, a company that mainly produces quick-frozen food, cooperates with Jiangnan University. Together they researched and developed a kind of yam bean balls, which can help delay the product's deterioration and extend its shelf-life.

Besides, the company developed frozen storage and refrigerated trucks that are suitable for different products, which help sell more products to smaller cities and rural areas.

"Chinese consumers have shown a higher requirement in terms of quality of food. The improvement of quick-frozen technologies will help enhance the taste and nutritional values. There is an expectation of more varieties of frozen food in the future," Wang of Frost &Sullivan said.

"Meanwhile, China's cold chain logistics system lacks good infrastructure, and its techniques are relatively weak, which are the biggest shortcomings that hinder the development of the frozen food sector. With more investments in the building of better cold chain logistics, it will improve and drive faster growth of the quick-frozen food industry."