Redefining the rules of attraction(2) 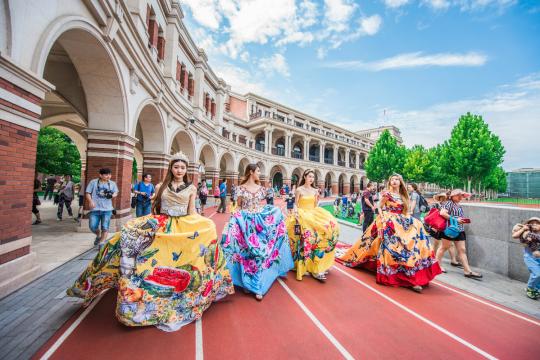 Fashion models at a promotional event in Tianjin's Five Great Avenues area. There are more than 400 European-style buildings in the area, which has become a major tourist attraction.Wang Yeming/for China Daily

Not only is Tianjin known for its innovation and competitiveness and ability to attract overseas and Chinese talent, it has also maintained its position as North China's industrial hub.

A long list of firsts were manufactured in Tianjin, including the country's first television, bicycle, wristwatch and bus. It is also home to the country's first international container port, and the first Ferris wheel suspended on a bridge, the 120-meter-high Tianjin Eye.

A complete industrial chain of airplanes, helicopters, drones, rockets and satellites has evolved in Tianjin. Up to one sixth of the country's crude oil is produced in the city, equivalent to 30.85 million metric tons annually.

It is the second largest industrial fund in the world designated for this sector, and is expected to drive rapid growth in the industry, according to a local research institute.

The companies in the intelligent manufacturing sector now account for 20 percent of the city's large companies, defined as those with annual income above 20 million yuan.

Their contribution to the local economy in the first half of 2019 accounted for 30 percent of the city's 400 billion yuan in industrial added value. The intelligent manufacturing sector experienced double digit growth over the period.

The city has upgraded a number of local factories into smart ones and production lines into digitized ones.

The world's first 64-core chip for computer processors was also developed in Tianjin and has been widely applied in the market.

During the first half of this year, the city's GDP grew by 4.6 percent to top 1 trillion yuan.

According to Jin Xiangjun, vice-mayor of Tianjin, the city's GDP is expected to continue its momentum in the second half of the year.