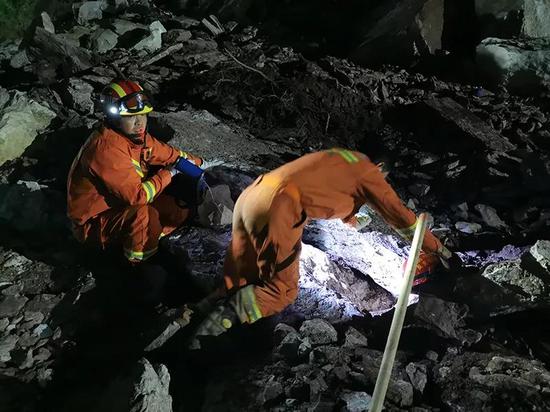 Rescuers search for the missing at the site of collapse. /CGTN Photo, provided by Sichuan Emergency Management Department

As of 9:45 p.m. local time on August 18, 12 bodies had been discovered in the area, all of whom suspected to be missing after the rock collapse.

On the same day, 667 firefighters and policemen, as well as 39 rescue machines, were dispatched to the scene, ensuring maximum search and rescue efforts.

Twelve of the 17 missing people in a massive rock collapse disaster in southwest China's Sichuan Province are confirmed dead, according to the latest information from rescue headquarters.

The bodies of the four people have been sent to the funeral parlor in the Ganluo County where the tragedy happened, and the local public security authority is working to verify their identities.

The collapse happened around 12:44 on Wednesday when 28 people were working on a section of the Chengdu-Kunming Railway to clear up obstruction caused by rainstorm-triggered landslides. Eleven of them escaped the calamity.

Over the past few days, hundreds of rescuers have worked against time to search for the missing with the help of sniffer dogs and various equipment, including heavy machinery and life detection instruments, yet no any sign of life has been found.

Since late July, this area has been hit by several strong rainstorms, which repeatedly disrupted the section of railroad within the county. Some experts have said the downpours have made the geological condition of the mountain fragile.

Forty-six-year-old Chen Kun has worked on the railway linking Chengdu and Kunming, two major cities in southwest China, for 29 years. His job is to maintain the bridges, tunnels and drainage equipment along the railroad.

"When I was running, it was like the rolling rocks were closely chasing after me, with some even slightly touching me. When I looked back about 40 meters away, the whole section of the railroad had been buried," Chen, one of the survivors, told CGTN.

He still cannot bear the thought of losing his co-workers, especially 28-year-old Yang Ming, whom he considered an apprentice.

"He was just seven or eight meters from me. He was able to escape. I think he just went back to inform others about the collapse," said Chen.

Chen describes Yang as hard-working, responsible and considerate young man like many other railway workers.

"The day before the tragedy, he sent me a message, saying 'Let me work your shift tomorrow. You take a break and come back afterwards.' These were the last words he said to me," Chen recalled, tearfully.

"Heartbroken" is the word he used repeatedly.

"He is just several years older than my son. Sometimes, I just treated him like my son. How can such a good young man leave us in an instant?"

Chen came back to work the day after the incident happened, monitoring the potential hazards as the rescue operation went on. He still has a glimmer of hope in his heart.

"I'm thinking that even if they lost their lives, I want to see their bodies and bid farewell to them. After all, we have been colleagues and friends for so many years," he said.

Looking ahead, Chen says his passion for the job won't be affected. Coincidentally, his name, Chen Kun, shares the similar pronunciation with the abbreviation of the railway, Cheng-Kun. He says ensuring its safe operation will be his lifetime responsibility.