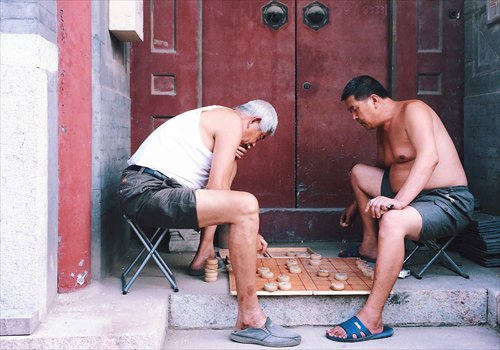 More people are starting to see the Beijing bikini as a unique cultural habit worth cherishing. (Photo/Courtesy of Liu Yu)

After local parks released a blacklist of uncivilized behavior in late July, the Beijing government now solicits public opinions for a draft law on these behaviors, including loud square dancing and wearing a "Beijing bikini."

The solicitation is being conducted by the municipal civilization promotion office and will run from Monday to August 25. It will serve as a reference for the ongoing Beijing civilized behavior promotion legislation, The Beijing News reported on Tuesday.

Beijing residents can access a questionnaire website and vote for the behavior they think should be included in the law. They can also comment on the upcoming law.

The Global Times reporter found that the online questionnaire lists 19 uncivilized behavior, including spitting, walking dogs off a leash, men appearing topless in the public and dancing in squares to loud music.

"The legislation is necessary if Beijing wants to be a harmonious and livable world-class city," Wang Zhenyu, a professor at the China University of Political Science and Law, told the Global Times on Tuesday.

"Soliciting public opinions for a draft law is an effective approach to capture public sentiment and motivate the public," Wang said.