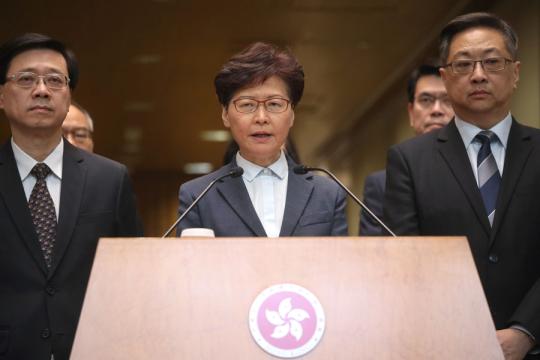 The Chief Executive, Carrie Lam, together with the Secretaries of Department and Directors of Bureau, and the Commissioner of Police, meet the media at the Chief Executive's Office, July 22, 2019. [Photo by Calvin Ng/chinadaily.com.cn]

Hong Kong Special Administrative Region Chief Executive Carrie Lam Cheng Yuet-ngor on Monday sternly denounced the violence carried out in the city on Sunday, saying violence would never be a solution but to breed more violence.

Such violent acts are vicious, have caused city-wide indignation and should be punished, Lam stressed.

Lam met with the media alongside principal government officials on Monday afternoonfollowing targeted violenceat the Liaison Office of the Central People's Government in Sai Wan, Hong Kong Island, and at passengers in a metro station in Yuen Long, New Territories.