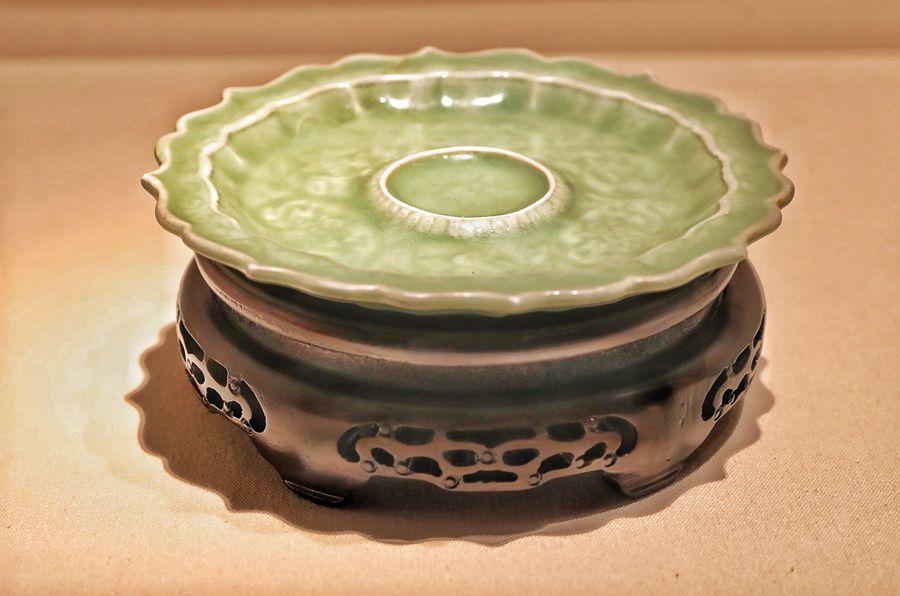 The manufacture of celadon at the Longquan Kilns was not only a money-spinner but also an early exercise in mass production and globalization.

They look like jade, but are made of earth.

For centuries, they set off on long voyages from the mountainous regions of southern Zhejiang province to captivate the world with their greenish glint.

Traveling back in time, over 800 celadon artifacts have been gathered together for an exhibition in Beijing to tell the story behind the Longquan Kilns, situated in today's Lishui, Zhejiang province. Starting in the Three Kingdoms period (220-280), the kilns continued to operate for 1,600 years up until the late Qing Dynasty (1644-1911).

Opening its doors at the Palace Museum on Tuesday, Longquan of the World: Longquan Celadon and Globalization will run through Oct 20. This is the largest display of Longquan celadon held anywhere in the world. The museum, China's former imperial palace between 1420 and 1911, has set aside two exhibition spaces for this major event: the Hall of Abstinence and the Palace of Great Benevolence. 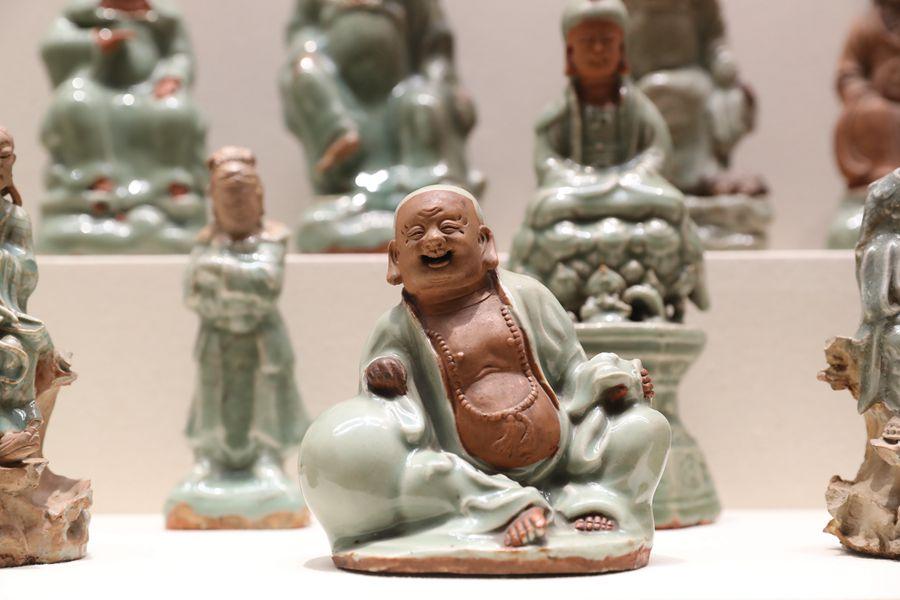 A statue of Maitreya Buddha from the Ming Dynasty. (Photo/China Daily)

"Longquan represents the highest level of craftsmanship of Chinese celadon-making," says Geng Baochang, 97, a researcher at the Palace Museum and China's leading expert on porcelain.

"This exhibition will show people how celadon originated in Zhejiang, and reached its peak in the Song Dynasty (960-1279)," he says.

The artifacts on display come in all shapes and sizes, and whether they were for daily use or for rituals, they reflect the different needs of consumers around the world. Whatever their purpose, the objects reflect their owners' taste for refinement.

After all, the Longquan Kilns were mainly used to serve the royal families during the Song and early Ming (1368-1644) dynasties, before celadon became a pillar of overseas trade in the 12th to 15th centuries.

"The products sold well around the world due to their high quality," he says. "Longquan celadon was an ambassador for Chinese porcelain overseas at that time. Its growing popularity also reflects how Chinese civilization began to gain recognition around the ancient world." 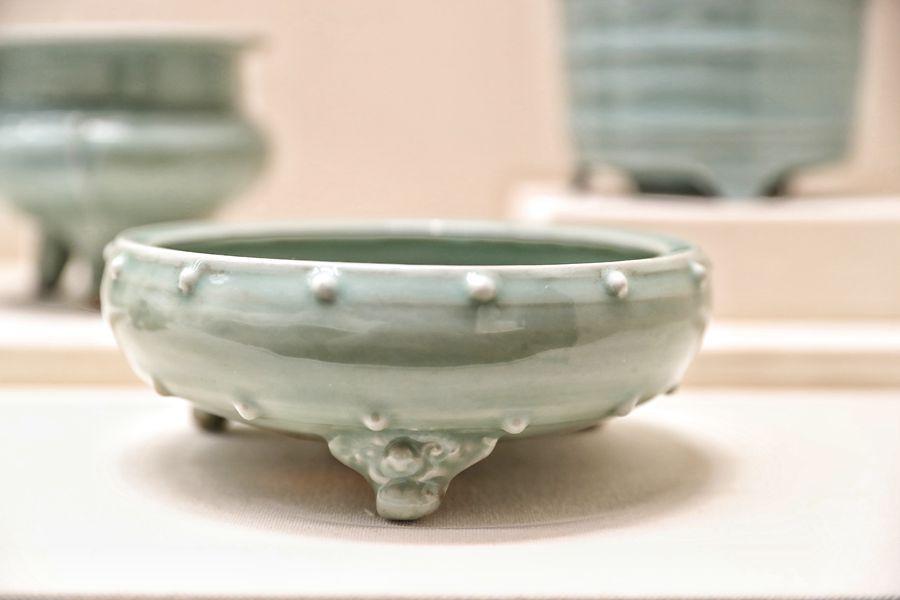 A tripod, which was used to wash writing brushes, from the Southern Song to Yuan dynasties (1127-1368). (Photo/China Daily)

For example, during underwater archaeological research off the coast of South Korea in 1975, 18,000 Chinese porcelain items were discovered at a single shipwreck－10,000 of which were made in Longquan. The ship sank in 1323 on a voyage from Ningbo in Zhejiang province to Fukuoka in Japan.

When products from the Longquan Kilns were first introduced to France, they amazed the nobility there. However, since there was no word for this new type of ceramic, they named it after Celadon, a character in the popular opera L'Astree, who wore clothes of the same exquisite color, Geng explains.

Booming outward trade not only brought huge wealth to China, but also built up a trade network that linked the Chinese economy with the rest of the world, says Chen Shuihua, director of the Zhejiang Provincial Museum and the co-curator of the exhibition. 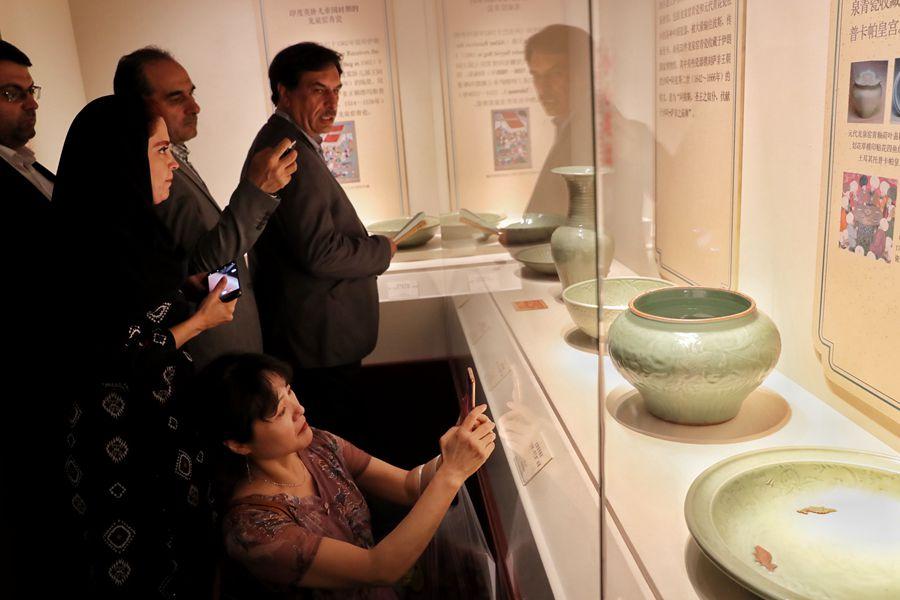 Iranian and Chinese visitors attend the exhibition Longquan of the World: Longquan Celadon and Globalization at the Palace Museum, which uses the famed porcelain variety from Zhejiang province to showcase the prosperous Maritime Silk Road. (Photo/China Daily)

About 300 heritage sites belonging to the Longquan Kilns were found along the Oujiang River, and archaeologists soon discovered a common trend: Production hubs gradually sprang up downstream toward the coastline in order to better facilitate export.

"Consequently, the manufacturing processes behind celadon were a microcosm of the early stages of globalization," Chen says.

And it wasn't just products that were exported, Chen notes. The techniques used in the kilns of Longquan also spread overseas amid the global frenzy for celadon.

Since the 12th century, local products that were copies of Longquan celadon popped up in several countries along the trade routes starting with China's neighbors like Japan and Vietnam, and moving onto Iran, Turkey and Egypt－and eventually all the way to Britain. Some typical examples of these are also on display at the exhibition in Beijing.

"For a very long period of history, celadon and its production methods were the conduit for Sino-foreign exchanges both in commercial and cultural terms," Chen says. "We have found a great deal of physical evidence to support that statement." In 2012, a national-level academic program called Compass was initiated by the National Administration of Cultural Heritage to conduct a study into the overseas influences on Chinese celadon. A series of overseas research programs were launched to retrace the steps of this long odyssey, and a number of discoveries were selected for display.

During excavations of ruins at the port of Julfar in Ras al-Khaimah, the United Arabic Emirates, countless pieces of Longquan celadon were found scattered all over the site, resting there for more than half a millennium as further evidence of the region's vast trading history.

Using the Persian Gulf as a transfer station, Longquan celadon was traded all over Africa. Of the 1,257 samples of Chinese porcelain pieces discovered at the Ruins of Gedi in Kenya, more than half were from Longquan, and most of the Ming Dynasty examples were from the same origin.

Output at the Longquan Kilns began to wane by the middle of the Ming Dynasty due to the rise of Jingdezhen in Jiangxi province, the site for the new imperial kilns. 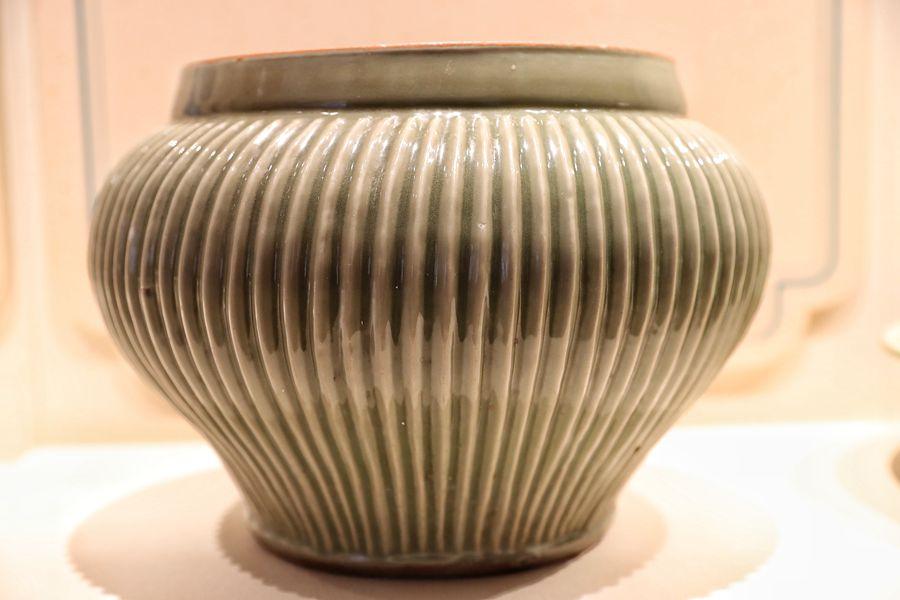 A 14th-century Longquan celadon jar, on loan from the National Museum of Iran. (Photo/China Daily)

Although Longquan had fallen out of favor, it continued to thrive in folk art. The jade figurines on display, loaned by the British Museum, show how jade took on a new lease of life when applied to creative forms in Longquan.

And the global importance of Longquan was given a more modern context after the ancient production methods used to create celadon there were inscribed on the UNESCO Intangible Cultural Heritage list in 2009.

"As a worldwide cultural symbol, Longquan celadon was a witness to the prosperity of the Maritime Silk Road," says Wang Xudong, director of the Palace Museum. "It can provide an important historical reference for the Belt and Road Initiative today, particularly in terms of how it helped to improve people-to-people connectivity and overcome cultural barriers."