Shanghai, in a parallel universe(1/6) 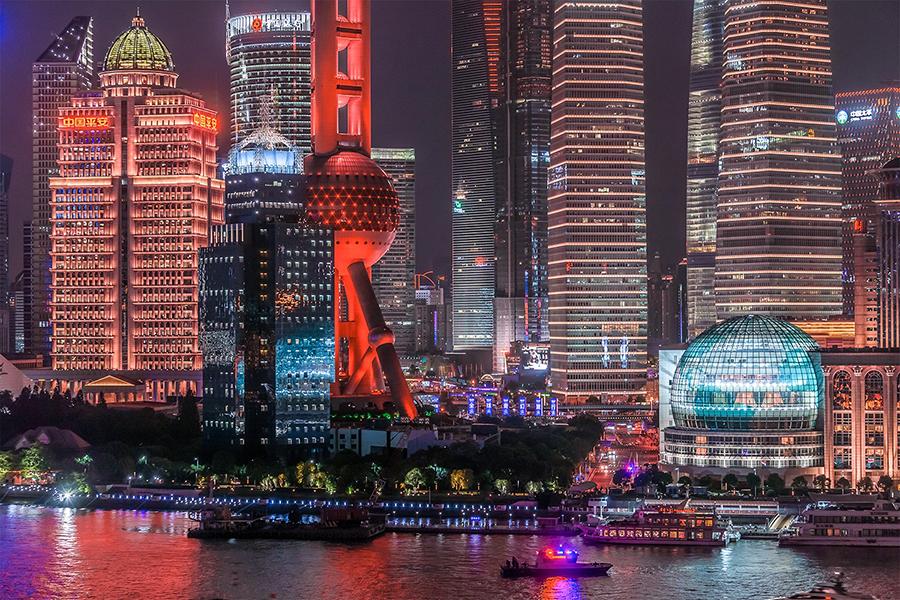 German architect and photographer Mark Siegemund turns his adopted city into a land of fantasy through his creative visual works that aim to stir the imagination.

In early May, Shanghai was transformed into a frozen landscape. The Huangpu River was frozen over, the buildings caked in snow and a towering wall of ice could be seen rising above the ground in the Lujiazui financial area.

A man with a long sword ambled toward the edge of a cliff located across the river in Puxi. As he surveyed the desolate landscape, three dragons emerged from behind the Shanghai Tower, their screeches reverberating through the city.

This was, of course, nothing more than a fantasy, Game of Thrones-inspired world that only existed in an image created by rising Instagram star Mark Siegemund. The 34-year-old German, who has been living and working in Shanghai since 2012, has also caught the attention of Chinese netizens in recent months. His works have been shared on Chinese social networking platforms, with many people praising his creative renditions of the city.

In his other works, Shanghai is transformed into Gotham City, the fictional place where the comic character Batman resides. Sun Wukong, also known as the Monkey King, can be found standing atop a temple. 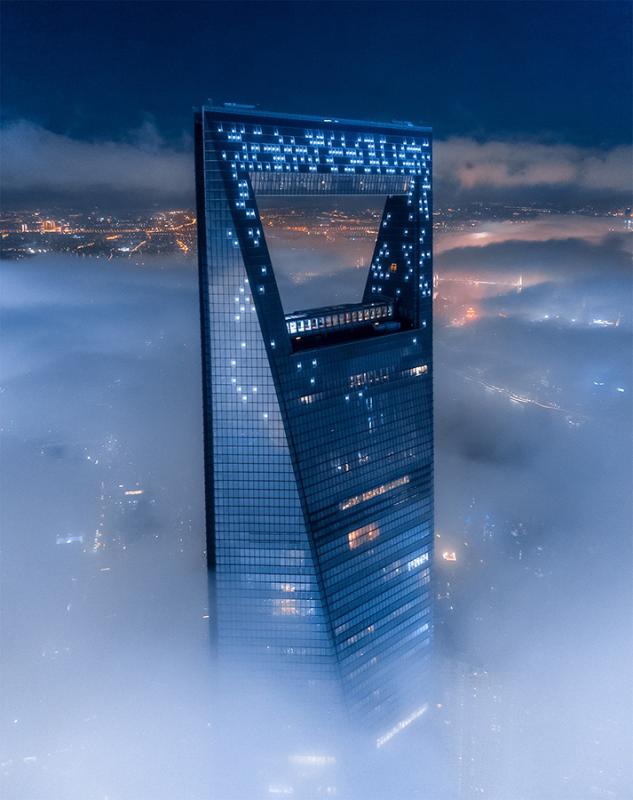 Mark Siegemund's photo: One Thousand and One Nights, an image of the Shanghai World Financial Center seen from above the clouds at night. (Photo provided to China Daily)

"For me, a photo truly becomes a work of art when I do the editing. Everyone can take photos. Some can take good photos. But it is the editing process that helps you to stand out from others because it allows you to input your personal voice."

Despite his talent for photography, the German insists that he is still very much an architect at heart.

Born in Leipzig, Siegemund says that he has been fascinated by architecture since he was a child. The fact that his father was an engineer who would gladly entertain his questions about how buildings worked also flamed his interest in the field. Such was his interest that Siegemund would secretly draw blueprints for planes and buildings during lessons. He also frequently followed his father to construction sites.

"I was in awe every time I entered a building. I would be examining all the details of the space. I just could not understand why others did not feel the same way," he quips. "I knew that I wanted to study architecture when I was 16."

Siegemund first arrived in Shanghai in 2011 when he was an architecture student at the Bauhaus University Weimar. During his time in the city, he participated in an exchange program with the China Academy of Art which also included a short stint with an architecture firm called Spark. 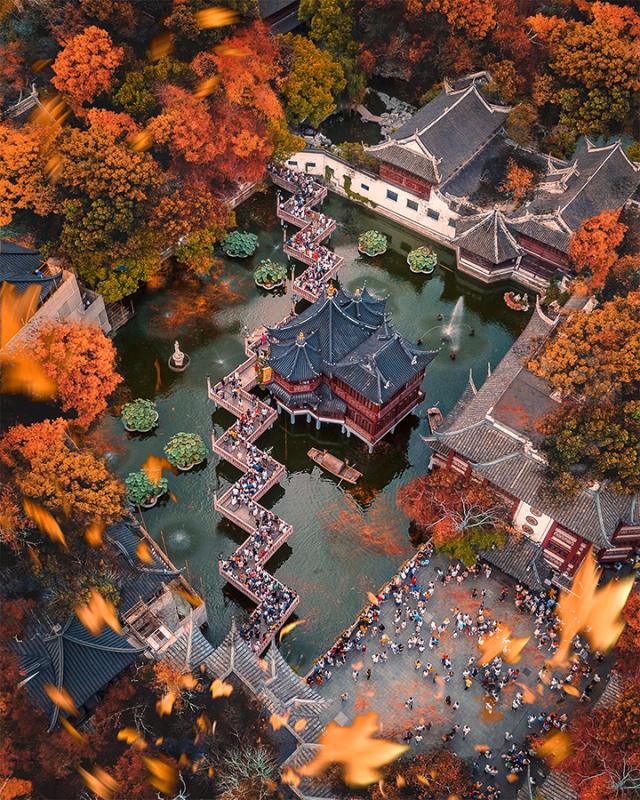 He still vividly remembers how amazed he was at the city when he first laid eyes on it, saying that the reality was nothing like what he expected.

"I was surprised that the city was so modern. My impression of China before I came was that it was this 'romanticized' land that was filled with rickshaws and traditional Chinese things. Many people in Germany still think that China is like that today," he laughs.

"In Germany, there's more uniformity in the style of the buildings located along the same street," he adds.

"Here in Shanghai, the landscape is just so dense, and the buildings differ so much from one another. Things are a little messy but it is also this mess that makes the scene so vibrant. There's a charm to this organized chaos."

Captivated by the vibrant nature of the city, he returned to Shanghai in 2012 after graduating, starting his career at an architecture firm that allowed him to travel around China to places like Dalian in Liaoning province, Guilin in Guangxi Zhuang autonomous region and Haikou in Hainan province. Back then, photography was just a means of helping him to document the unique architecture of Shanghai.

It wasn't until three years ago that he started an Instagram account and took his photography to another level by adding a touch of flair through editing software. Slowly but surely, his works won him a legion of fans on Instagram－he currently has about 45,000 followers. 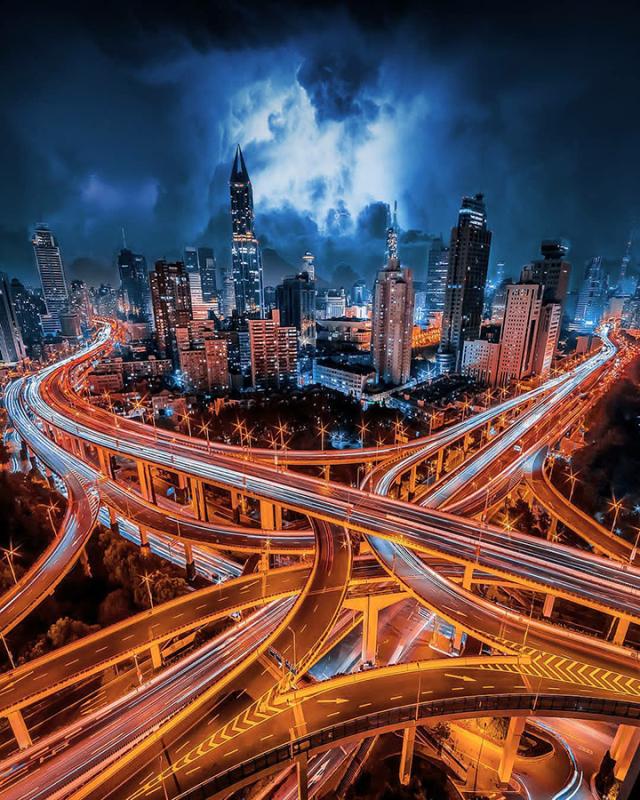 His photos also caught the eye of design firms that later commissioned him to do interior and architecture photography. Even major labels such as luxury fashion house Burberry have hired him to shoot a brand campaign. One of the memorable assignments he has undertaken was documenting a new car transport vessel that was berthed in Shanghai.

When asked to name one of his favorite photos of Shanghai, Siegemund singled out the image which features a section of the Yan'an Elevated Road. Shot at night, the image depicts a series of roads criss-crossing one another, with skyscrapers set against a backdrop of an illuminated sky.

The urban legend behind this section of the Yan'an Elevated Road, he explains, was what compelled him to shoot the photo.

According to the urban legend, engineers once faced a problem installing a new concrete pillar along the expressway because they could not drill to the required depth. A monk who was invited to perform religious rites at the location said that the drilling attempts were unsuccessful because the site was where the city's guardian dragon rested. He then told the construction company that the pillar must be adorned with nine dragons before it could be installed.

The engineers were able to install the required pillars in the location after following the monk's instructions. When the monk died a few days later, many people attributed the cause of death to him revealing the secret location of the dragon's abode.

"I hope that my photos can stir people's imagination. The thing about Instagram is that people view your photo for only a second before swiping to the next one on their feed. I want my photos to be those where people can stop and wonder. I think my best pictures have this quality," he says, referring to the image. 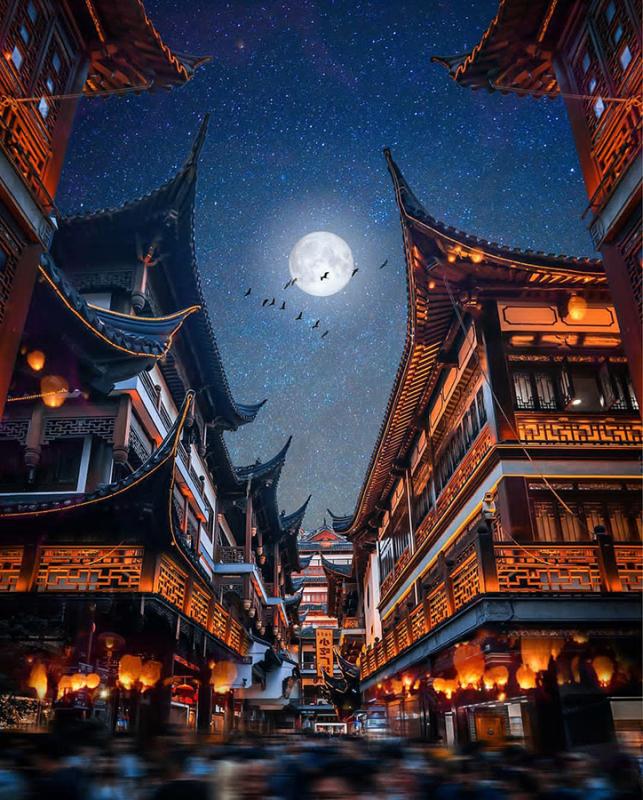 Mark Siegemund's photo: Anticipation, a photo taken in one of the busiest streets in Yuyuan Garden Malls at night. (Photo provided to China Daily)

While dramatic night shots like this particular image of the highway account for a considerable portion of his works, Siegemund says that night shoots take place out of necessity.

"If you look at the trend of shooting night urban images, it's really because most of the photographers have day jobs. They can only shoot at night after work," he says.

"Photography is still more like a hobby to me. I like being behind a desk doing architecture work. I like being able to choose what photography projects I want to embark on."

Siegemund adds that he expects himself to be working in the architecture field for the foreseeable future. Shanghai, too, will also remain his home for the coming decade.

"I can imagine staying here for another eight to 10 years. The problem with Europe is that people deliberate too much. Things move so slowly. To decide on something takes such a long time that so many things already pass," he explains.

"Here in Shanghai, something new is always happening. Things are always changing. I also like how the Chinese learn by mistakes. They dare to try and fail. This kind of attitude is good and will help the country forge a better future. You can build your dreams here." 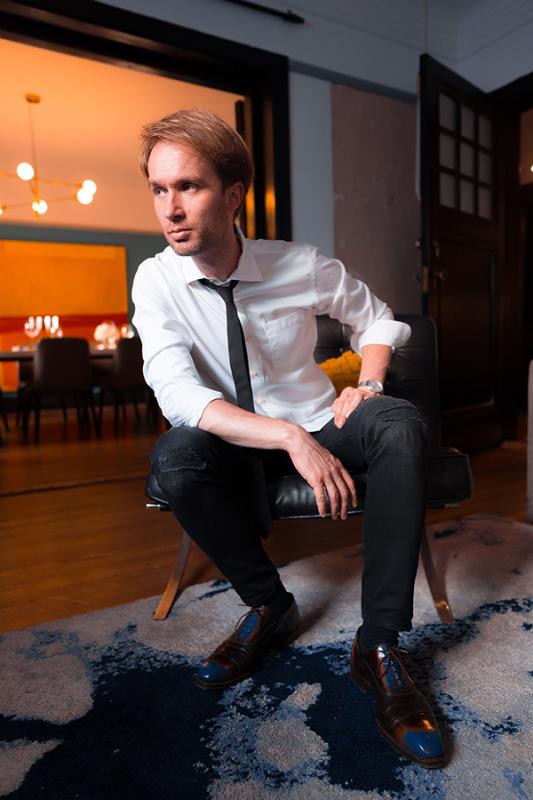