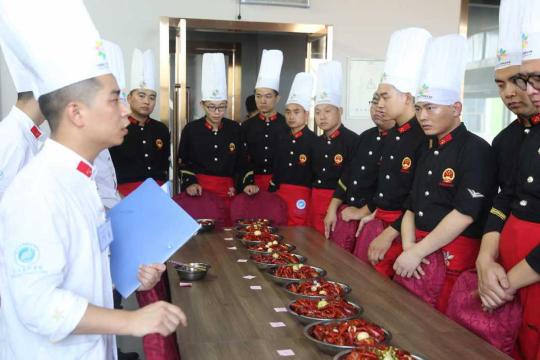 Students listen to an instructor at the "crayfish school" in Qianjiang city, Central China's Hubei province, where they are taking lessons on crayfish cooking. (Photo by Ye Cheng for chinadaily.com.cn)

The Ministry of Education announced on Wednesday that the number of National Scholarship will increase by 10,000 this year, all of which will be awarded to outstanding students from higher vocational schools, with 8,000 yuan ($1,164) for each student every year.

At a news conference at Lanzhou University, the ministry said the coverage of National Motivational Scholarships and National Grants in polytechnic colleges have also been expanded.

Starting this year, the coverage of National Motivational Scholarship in higher vocational colleges will rise by 10 percent, with the funding standard being 5,000 yuan per student per year. Meanwhile, the National Grants coverage in higher vocational schools will also be increased by 10 percent from this year's spring semester, and its average subsidy standard will be rise from 3,000 yuan to 3,300 yuan per year.

Besides, the National Scholarship will be set up in Secondary Vocational Education (including technical schools) this year on to reward outstanding full-time students. The scholarship will be awarded to 20,000 students each year, with 6,000 yuan per person. These policies will be implemented in both public and private secondary vocational schools.

Based on the published data from the ministry, students from financially strapped families were subsidized for nearly 100 million times in 2018. Taking higher education as an example, subsidies were offered 43.88 million times last year, amounting to 115 billion yuan in total.

Zhao Jianjun, deputy director of the finance department of the Ministry of Education, said that the State Council has approved programs of scholarships in higher and secondary vocational education. The programs came into effect early this month.