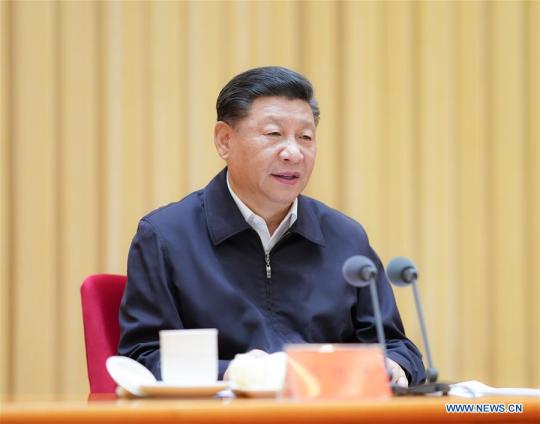 Xi Jinping, general secretary of the Communist Party of China Central Committee, urged central and State institutions on Tuesday to take the lead in strengthening Party building and firmly implement the committee's decisions and policies.

Xi, also Chinese president and chairman of the Central Military Commission, made the remark during a meeting in Beijing held for central and State institutions on Party building.

He called on Party members and officials of central and State institutions to serve as role models in studying Party theory, improving work practices and exercising strict discipline to allow the CPC Central Committee and the people to be assured of, and satisfied with, their work.

Xi also instructed them to take the lead in upholding the authority of the CPC Central Committee and its central and unified leadership by fulfilling their duties earnestly in both words and deeds.

Further efforts must be made to eradicate bureaucracy and formalism, he said, and overall supervision must be exercised over Party members and officials to help them steer clear of corruption.

Enhancing clean governance and assuming responsibilities are equally important for Party officials, he stressed, warning that anti-corruption efforts should not be an excuse for them to shirk their responsibilities or neglect their duties.

Xi urged leading officials to take primary responsibility for Party building, and said they will be considered to be in dereliction of duty if they take no real action in, or fail to earnestly strengthen, Party building.

The General Office of the CPC Central Committee issued a circular in March demanding central and State institutions set an example for pushing forward the great new project of Party building in the new era.

Efforts should be made to promote comprehensive progress of primary-level Party organizations, it said, while calling for perseverance in strengthening discipline and fighting against poor work styles.

The quality of the Party's mass work must be raised, and leadership over Party building in central and State institutions must be strengthened, the circular said.