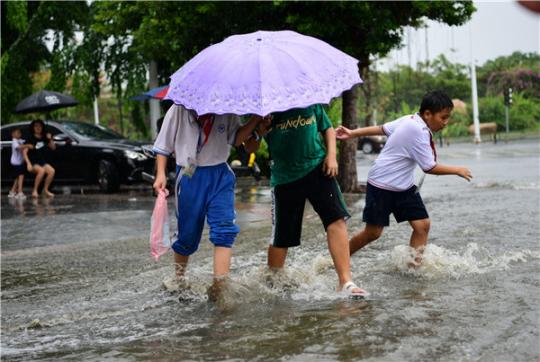 Heavy rainfall will continue to hit southern China for the first half of July after about 50 floods and geographic disasters were reported last month, while heat waves will remain in northern China, according to the meteorological official.

Liao Jun, deputy head of the disaster relief and public service department of the Chinese Meteorological Administration, said at a news conference on Tuesday that up until July 12, there will be more rainfall in southern regions than in previous years.

Precipitation could reach 100-200 millimeters in areas along the Huaihe river, the Hanjiang river, the western part of southern China and southwestern China. Rainfall in the northern part of the Yangtze River and part of South China will reach 300 mm, Liao said.

"Rainfall in these areas will be 30 to 70 percent more than that of the same period during normal years," he said.

South China's Hainan province issued an alert for a forthcoming typhoon on Tuesday and suspended all ferry services from noon in the Qiongzhou Strait.

Typhoon Mun, the fourth formed in the northwestern Pacific this year, is projected to make landfall in the eastern coastal areas of Hainan between late Tuesday and early Wednesday, packing winds of up to 72 kilometers per hour, becoming the first to make landfall in China this year. It will then pass through the island and strengthen before heading for northern Vietnam.

The administration issued a blue alert for the typhoon, the lowest level in China's four-tier color-coded warning system and warned that the island will be hit by gales and heavy rain from Tuesday to Wednesday.

Boats in the northeastern waters of the South China Sea and around Hainan have been ordered to return to harbors.

Liao said that to reduce the loss caused by natural disasters, it is necessary to strengthen the application of new technology to achieve accurate forecasting and early warning. Techniques such as refined analysis, intelligent grid forecasting and disaster risk warning for meteorological services should be enhanced.

Meanwhile, temperature for the next 10 days in northern China will be high and can reach 40 degrees Celsius.

"Since flooding season began, the average temperature nationwide is 14.2 degrees Celsius, 0.9 degree Celsius higher than the historical average. It is the fourth highest in the same period since 1961," Liao said.

He added that the possibility of temperatures above 35 degrees Celsius will gradually increase. In some areas, there may be high temperatures and high humidity which will affect health as well as water and electricity supply.

Liao said that forest fire prevention in the Greater Hinggan Mountains is needed, especially for lightning strikes. And students who will be on summer vacation should pay attention to heat and rainfall which may cause floods and mountain slides while traveling.