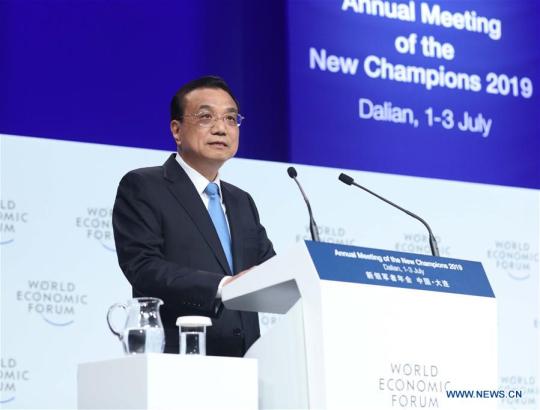 Premier Li Keqiang reaffirmed China's commitment to expand opening-up to foreign investment on Tuesday as he announced a string of measures to broaden market access, including measures to scrap limits for financial companies one year earlier than planned.

"China will become increasingly open, transparent and predictable to foreign investment, and its overall trade investment will be better and better," Li said.

He spoke at the opening ceremony of the World Economic Forum's three-day Annual Meeting of the New Champions 2019, also known as Summer Davos, taking place in Dalian, Liaoning province, through Wednesday.

The country will also broaden market access for foreign investment in sectors such as value-added telecommunications services and transportation, he added.

Li also pledged support for foreign investment in electronics, equipment manufacturing, pharmaceuticals and new materials, and its movement to middle and western regions, with favorable conditions to be offered for equipment imports, corporate taxes and land supplies.

Foreign institutions will be offered treatment equal to that of domestic companies in credit references, credit ratings and payments, and two-way opening-up in the securities market will be expanded, he said.

Li vowed that China would take the initiative to further reduce the overall level of tariffs and reduce nontariff barriers as part of efforts to expand imports in goods and services.

"In this process, we will maintain the exchange rate of the yuan at a reasonable and balanced level," he said, adding that the country will not resort to competitive devaluation of its currency.

He ruled out the possibility of adopting a deluge of strong stimulus policies, saying that the government will prioritize fostering a business environment in line with market principles, the rule of law and international standards.

The government will come up with regulations that are in line with the foreign investment laws, which will come into force next year, he said.

Li also defended the rules-based multilateral trade system with the World Trade Organization at its core, which he called the cornerstone for economic globalization and free trade. He said its authority and effectiveness must be respected and safeguarded.

China supports necessary reform to the WTO, but the basic rules of free trade, which promote opening-up and growth, cannot waver, he said.

The premier assured business leaders that the country will adopt stronger measures to protect intellectual property rights, with a system of punitive compensation for IP infringements set to be enforced.

Li conceded that the Chinese economy is faced with fresh downward pressure, with increasing uncertainty and unstable factors from outside and sluggish domestic investment.

However, he expressed confidence in the economy's growth potential and underscored the importance of good interaction between economic growth and improvement in living standards so that the potential of domestic consumption can be unleashed.

"China has more than 100 million market entities and about 1.4 billion people. There is a huge market behind the improvement in public livelihood and the upgrading of consumption," he said.

Summer Davos 2019 in Dalian has attracted more than 1,800 delegates from over 100 countries, representing government, business, civil society, academia and the arts.