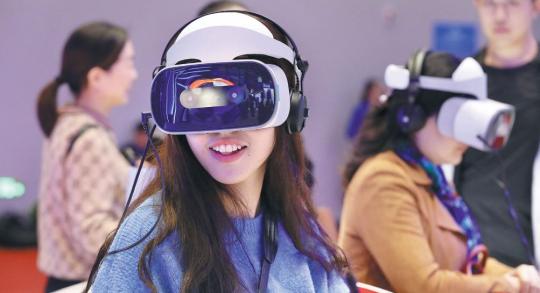 China's digital economy, which uses internet technologies to empower industries and reshape people's lives, accounted for a third of the nation's GDP in 2018, a report tracking the sector's development said.

The volume of the nation's digital economy expanded to 29.9 trillion yuan ($4.33 trillion) last year, up 12 percent from 2017 and faster than the country's GDP growth, a Digital China Index Report by the research arm of Tencent Holdings Ltd said.

"Such robust expansion is conducive to stabilizing growth, adjusting economic structure and enhancing quality at a time when the economy encountered external uncertainties," said the report published during the three-day Tencent Global Digital Ecosystem Summit that runs through Thursday.

The report examined the level of digitalization from the lens of industry, consumption and civic services. It found that digitalization has a profound impact on traditional industries and is exerting a positive influence on employment.

For example, every extra score gained in the index has resulted in an addition of 660,000 to 2.39 million people to become newly employed. In certain regions, the proportion of newly-hired people engaged in the digital economy reached 40 percent or more.

"The 'main battlefield' of the digital economy has shifted from consumption-oriented internet to industrial internet, which has shown the fastest growth and highest level of concentration," said Tencent President Martin Lau.

The most digitalized cities in China are Beijing, Shenzhen and Shanghai. Lower-tier cities are catching up fast, with the index gauging the digitalization of industries jumping 216.6 percent year-on-year in these areas. The use of cloud computing has also quadrupled in the past year in central and western China.

Companies like Tencent have been pushing ahead with technologies to revolutionize industries from healthcare to retail. For instance, digital means have been applied to reshape the medical registration process, conduct online training for doctors and assist them with diagnosis using artificial intelligence, said Tencent Vice-President Ding Ke.

Modern retail is also being redefined to boost sales by digitalizing offline services and acquire new customers through the launch of new online shops and the addition of new touch points.

For instance, Walmart saw its sales in brick-and-mortar stores surge by 50 percent and online sales double in the first month after the adoption of WeChat Mini Program, according to Davis Lin, Tencent's vice-president who also oversees the smart retail business unit.