Inside the world's highest airport: What's it like working for Tibet's civil aviation? 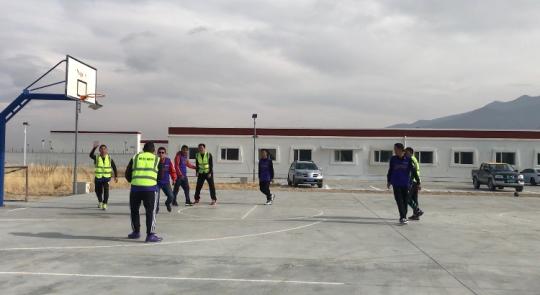 On a basketball court at Ali Kunsha Airport, which sits at an altitude of 4,274 meters above sea level, a group of young people wearing airport safety vests are playing. They are sweating, yelling and breathing loudly. These young people who work at the fourth-highest airport in the world will represent the airport the following day to play in a regional championship in Ngari prefecture, Tibet autonomous region.

"They simply like it," said Tan Tao, deputy chief at the Ngari station of the Civil Aviation Administration of China. "When you like something, you won't care whether you're on a plateau or not."

The fast development of Tibet's civil aviation industry demands more workers, but few people find working in Tibet attractive because of its harsh living environment— low oxygen levels, limited access to food and big temperature swings. For those who do stay, they find life more meaningful and diverse.

"We had 194 people on our team yesterday, but one just quit because of health concerns, so we have only 193 now," said Tan, who expressed understanding as well as pity in accounting for the personnel at the airport.

Tan has worked at the airport for nine years, and spends his days managing staff and dealing with emergencies.

He coordinated the flight schedule by reaching out to the local hospital and Tibet Airlines, one of three airlines operating at the airport.

For airports in Tibet, serving as the lifeline for patients requiring transport has been one of their major missions.