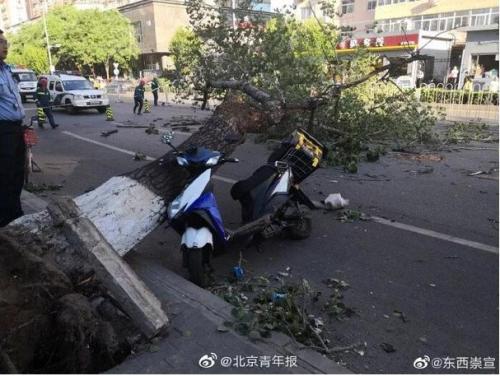 Strong wind uproots a tree which hits and kills a deliveryman in Beijing, May 19, 2019. (Photo/Beijing Youth Daily)

At least four people were killed, more than 50 flights were diverted to other airports and two trains arrived late in Beijing on Sunday when strong gales flattened walls, knocked down trees and damaged farms.

The capital issued blue alert for strong winds on Sunday, with five suburban districts of Tongzhou, Yanqing, Changping, Huairou and Shunyi upgrading it to yellow alert later. These areas were hit with strong winds as high as 8-9 grades, with gales reaching 10 grade at some places. According to forecast, the wind could still be as high as 7-8 grades on Monday.

The gale toppled a wall near Dongzhimen Bridge in downtown Beijing, hitting three pedestrians, two males and one female. Two of them died at the scene and one at hospital, Dongcheng District said via Sina Weibo.

Food delivery service Meituan said one of its deliverymen was hit and killed by a fallen tree when delivering food.

Trains K1190 and Y513 arrived in Beijing late because Beijing-Chengde railway was hit by fallen trees in Shunyi district.

At least 13 cars were damaged in a parking lot after being hit by the fallen roof.