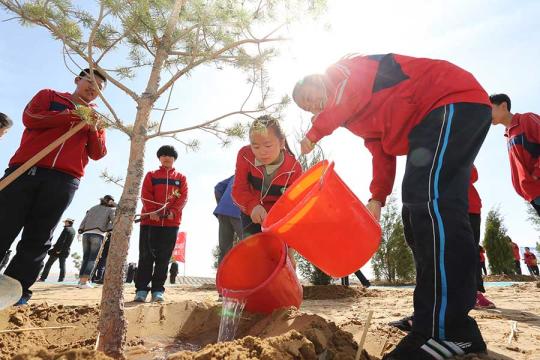 The land formerly used by factories cannot be left idle, because many local governments need to develop valuable downtown land to boost their revenue. But remediation has to precede development, Gao said, because much of the land has been contaminated by industrial pollution.

"The huge market potential in soil remediation has yet to be unlocked," Gao said, adding that many projects are pilot ones because the national survey of the soil pollution situation is continuing.

He said financing is a key challenge that has been hindering the industry's development, as local governments previously had to foot the bill for soil remediation work. The law on soil pollution control may help, because it states that polluters or those with the right to use the land should pay for the cleanup.

"But it's not yet known if the polluting companies or owners of landuse rights, many of them small and medium-sized, can afford the high cost involved," Gao said. "It's also not easy to identify the polluters because it's difficult to trace how land was polluted."

The industry needs to reform the current business model, which only concentrates on soil remediation, to address the challenges, he said, adding that combining soil remediation with further development, for example real estate projects, could offer a solution.

Gao said local governments could give contracts for projects involving remediation and development to big State-owned enterprises, which have better access to financing, and companies specializing in soil remediation could become subcontractors.

Environmental improvement often makes land more valuable, and such a model could help create a win-win situation. Local governments would earn revenue from land transactions without having to pay for soil remediation, while developers could also benefit from higher land values.

Zhao agreed that the model offered a solution to the industry's financing challenges, adding that Elion had tried it successfully in a project in Tianjin.

Meanwhile, he said, the industry is also troubled by a lack of expertise in areas such as soil remediation and promoting the business model.

Cheng said Chinese universities have not provided the talent the industry needs, with students majoring in environmental engineering and science learning more about air and water pollution than soil pollution. They might know a lot about chemistry and biology, but their knowledge of geology was poor.

"My companies have to train most of the talent we need," he said. "We need to reform universities' cultivation of talent for soil remediation. It's not possible for companies to cultivate the talent they need all the time, and that makes it extremely challenging."