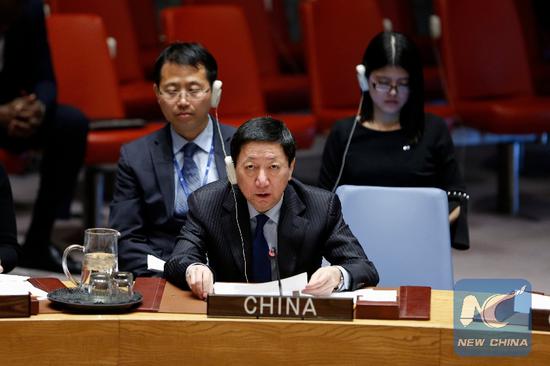 A Chinese envoy said Tuesday that China is firmly opposed to proliferation of weapons of mass destruction (WMDs) and their means of delivery.

"China has consistently and strictly implemented its international non-proliferation obligations and committed to the political settlement of non-proliferation hotspot issues, and has made positive contribution to this end," Wu Haitao, the charge d'affaires of China's Permanent Mission to the United Nations, told a UN Security Council meeting on non-proliferation of WMDs.

"China is ready to further deepen its cooperation with the committee (Security Council 1540 Committee established pursuant to Resolution 1540) and will continue to work with all other countries to make positive contribution to the perfection of international non-proliferation regime, global non-proliferation governance, and lasting peace and security for all," he said.

The Chinese envoy expressed his appreciation for the "long-term joint efforts of all parties," noting that "the international non-proliferation consensus has steadily deepened."

"Its mechanism has gradually improved, and the cooperation has further deepened," he added.

However, the global security landscape "remains complex and grave," he said. "In a globalizing world with technological advances, the risk for non-state actors, particularly terrorists, to gain access to WMDs and related materials and technologies still exists."

Under the new circumstances, the international community should continue to "deepen cooperation and further strengthen global governance in the area of non-proliferation," he noted.

The envoy then put forward a four-point proposal by placing first the need to uphold multilateralism.

"First, there is a need to uphold multilateralism and foster an enabling security environment," he said.

All countries need to embrace "the concept of common, comprehensive, collaborative and sustainable security...and eliminate the threat of proliferation from its root," he said.

"All parties and countries should effectively maintain the authority, universality, and effectiveness of the international non-proliferation regime, effectively avoid non-state actors, especially terrorists, from acquiring weapons of mass destruction and related materials and technologies," said the envoy.

"Thirdly, we must strengthen state responsibility and promote pragmatic cooperation," he said, noting that the primary responsibility for non-proliferation "should be borne by governments."

"Fourth, the committee should adhere to the principle of consensus and ensure the primacy of member states in non-proliferation efforts," he noted.

On April 28, 2004, the Security Council unanimously adopted Resolution 1540 under Chapter VII of the UN Charter which affirms that the proliferation of nuclear, chemical and biological weapons and their means of delivery constitute a threat to international peace and security.