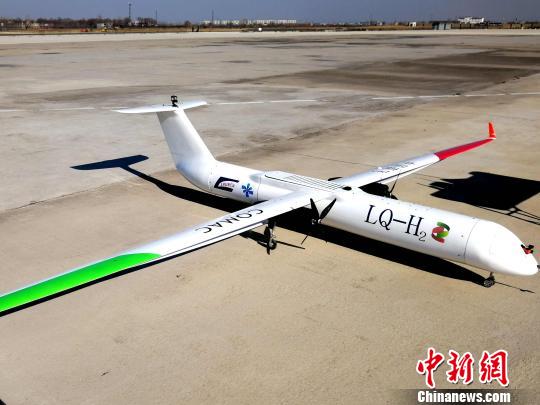 The new-energy plane LQ-H2 is jointly developed by COMAC in cooperation with the State Grid, Shenzhen-based Gree and the School of Aeronautic Science and Engineering at Beihang Univeristy. (Photo provided to China News Service)

COMAC said the steady test flight, in which all the aircraft systems responded well, has given sufficient verification to the hydrogen fuel-cell systems it uses.

Lingque H aircraft, with a wing span of six meters and supplemented by lithium batteries, have different tails and types of landing gear. The aircraft, developed for the purpose of verification at present, has completed ten test flights since January 2019, and the latest success means substantial progress has been made in developing new-energy, civil aircraft, according to COMAC.

Yang Zhigang, with COMAC Beijing Research Center, said hydrogen is very abundant and can be obtained through solar, wind and other energy sources, making it an energy source capable of developing a low-carbon sustainable transportation system.

Lingque H is jointly developed by COMAC in cooperation with the State Grid, Shenzhen-based Gree and the School of Aeronautic Science and Engineering at Beihang Univeristy.

COMAC said the key researchers in this program were all new employees who joined the company in 2018 as it works to promote innovation and foster talent.