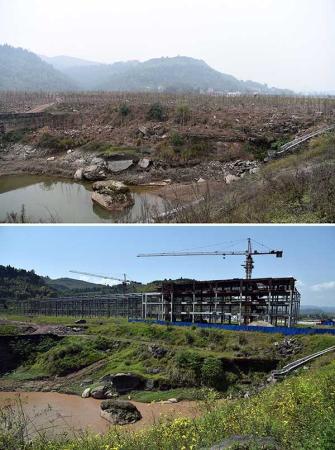 Photo shows the environmental improvements of a site in Shizhu county, Chongqing ,under ecological restoration in January. (Photo/Xinhua)

According to a report published by the Research Institute for Environmental Industry, which is affiliated with the Beijing-headquartered China Environment News newspaper, if soil pollution is curbed by next year and the soil environment is comprehensively improved by the middle of this century, conservative estimates put the size of the market at 1.9 trillion yuan. It put the upper end of the potential market at 5.6 trillion yuan.

Wei Li, a board member of listed company Beijing GeoEnviron Engineering& Technology, forecasts that the soil remediation market in China could be worth 21.2 billion yuan this year.

One thing driving the industry's growth is an increasingly complete system of policies, laws, regulations and standards for soil remediation, she said.

The country's first national law on soil pollution and control came into effect on Jan 1. It stipulates that national and provincial funds should be established for soil remediation, and also clarifies responsibilities for soil pollution.

In addition to a general guideline for soil management, China now boasts specific regulations for this in urban areas, farms and mines. A national standard for soil quality also came into force last year, said Wei, who has been involved in the emerging industry for 15 years.

She said the country's rapid urbanization, and associated real estate development, has been another driver of the industry's growth. With the complete system in place, local governments need to remedy soil pollution before allowing land to be used for property projects.

"Soil remediation projects or soil pollution surveys were carried out in all 31 provincial-level regions in the Chinese mainland last year. Tianjin and the provinces of Jiangsu, Hunan and Zhejiang led the way, each spending more than 1 billion yuan," Wei said.

Gao Jie, secretary-general of Zhongguancun Zhongxin Soil Remediation Industry Technology Innovation Alliance, said the soil remediation industry is also booming because of industrial restructuring in many cities, with many factories being moved out of downtown areas.