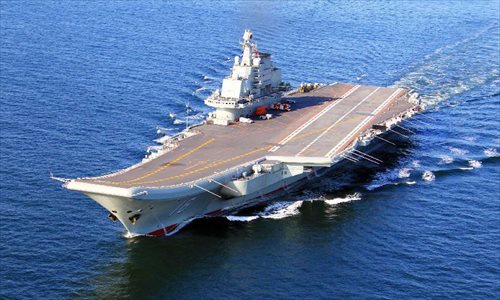 China's first aircraft carrier Liaoning might be embarking on a new sea trial on Monday after more than half a year's maintenance and modification. Military experts say the warship will come back not only replenished but also strengthened.

The aircraft carrier Liaoning(Hull 16) seems to have set out from the Dalian Shipyard in Northeast China's Liaoning Province with the assistance of tug boats on Monday morning, according to photos posted on Sina Weibo on Monday.

The vessel's alleged movement coincides with a notice of a military exercise released by the Maritime Safety Administration of China on Thursday. The exercise is scheduled from Monday to January 28 in North Huanghai Sea near Dalian, and other ships are prohibited from entering a designated area.

The notice did not mention which ships might be involved in the exercise.

Wang Yunfei, a naval expert and retired People's Liberation Army (PLA) Navy officer, told the Global Times on Monday that the Liaoningcould be on a sea trial to test all the upgrades that have been made after more than half a year's maintenance and modification.

"After this sea trial, there will be a final acceptance check. Normally, the carrier will be handed over for operation again in two months," Wang said. The warship is expected to participate in a possible naval parade in celebration for the 70th anniversary of the PLA Navy's founding in April.

The Liaoningbegan its maintenance in the Dalian Shipyard in July 2018 after some six years of service in the PLA Navy, Beijing-based newspaper Science and Technology Daily reported.

Intense operations and the sea environment will inevitably result in degradation and corrosion of the ship, and Wang said it is necessary for an aircraft carrier to undergo regular maintenance after several years of operation, including replacing parts and components with new ones in order to ensure the vessel functions properly.

In addition to maintaining the Liaoning's capability, photos show modifications were made to the ship's superstructure.

China has developed new and advanced technologies since the Liaoningwent in service, which have already been installed on the Type 001A, China's second carrier, Wang said, noting that using these technologies, especially those involving the air traffic control systems and command management system, will enhance the Liaoning's combat capability.