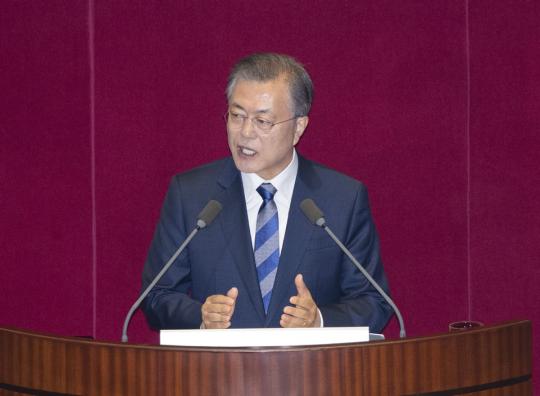 Second summit between Kim, Trump is 'right before our eyes'

The Republic of Korea said on Thursday that Kim Jongun, top leader of the Democratic People's Republic of Korea, is expected to visit Seoul "soon" as part of a flurry of high-profile diplomacy aimed at denuclearizing the Korean Peninsula, with analysts saying the move may pave the way for a second summit between the DPRK and the United States.

He also said a second DPRK-U.S. summit is "right before our eyes".

"Now the South (the ROK), the North (the DPRK), and the United States will achieve the complete denuclearization and lasting peace on the Korean Peninsula," he said, giving no further details.

At the third summit between Kim and Moon in Pyongyang in September, the two leaders agreed that Kim would visit Seoul "in the near future" without giving a specific date.

Moon later suggested that the trip was likely to happen this year.

"A historical starting point toward co-prosperity on the Korean Peninsula and in Northeast Asia is just ahead of us," said Moon who described it as an "opportunity that came like a miracle and should never be missed".

If the visit takes place, Kim would be the first DPRK leader to visit Seoul since the 1950-53 Korean War. The war ended with an armistice rather than a peace treaty, leaving the two sides still technically at war and divided by the Demilitarized Zone.

Meanwhile, Yonhap news agency reported that Seoul and Pyongyang have stopped all hostile acts in the border area on Thursday as agreed in a military deal signed by the two neighbors' defense chiefs amid a rapid diplomatic thaw.

The agreement was also reached during the Pyongyang summit. Under the deal, the two sides would stop live-fire artillery drills and field maneuver exercises by regiments or larger units within the 5-kilometer border areas from the military demarcation line dividing the peninsula.

The operation of drones, helicopters and other aircraft would be banned in areas up to 40 km from the demarcation line.

The live-fire artillery drills and maritime maneuvers would be prohibited in buffer zones in the eastern and western waters of the peninsula.

The ROK's Defense Ministry said the DPRK side has officially expressed its willingness to implement the agreement during the general-grade military talks on Oct 26.

Wang Junsheng, an associate researcher at the Chinese Academy of Social Sciences, said stopping all hostile acts would become an effective action to defuse military ten-sions and build trust between the two neighbors, and become a meaningful step toward the denuclearization of the Korean Peninsula and the final settlement of lasting peace.

Wang noted that Moon's invitation for Kim to visit Seoul is also seen as a move to lay the groundwork for a second DPRK-U.S. summit.

But he also noted that there are still many challenges ahead, as it must yield something more substantive than the Singapore summit held on June 12.

The prospects for a second meeting between Kim and U.S. President Donald Trump improved after U.S. Secretary of State Mike Pompeo made his fourth visit to Pyongyang last month. But no breakthrough has followed after that.

On Wednesday, Pompeo told a U.S. TV program that he would talk with the DPRK side this month to discuss Pyongyang's readiness to open its nuclear and missile sites for international inspectors as well as the second summit.

Media speculated Pompeo's remarks suggest that the preparation work for the next Kim-Trump meeting is now underway.