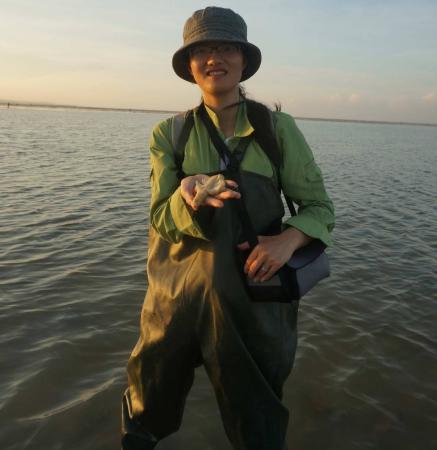 Profound economic and social changes have taken place in the Guangxi Zhuang autonomous region since China launched its reform and opening-up policy 40 years ago.

As an environmentalist, Lin Wuying is happy to find that people have begun to realize that they are closely connected with other species and are increasingly keen to participate in environmental protection in the region.

She was first attracted by the environmental practices of Fauna and Flora International in China after completing an environment-related master's degree in the United States in 2012.

Lin initiated a program in 2013 to protect the Chinese horseshoe crab, an arthropod that lives near the coasts of China, and Northeast and Southeast Asia.

The 33-year old is a founder and science director of the Guangxi Biodiversity Research and Conversation Association, an NGO set up in 2014 to conduct biodiversity research.

"The population of the Chinese horseshoe crab has declined by more than 90 percent since the 1990s, which means it could be listed among endangered species," she said. "In some Guangxi restaurants it's also served as a dish, hastening its decline as well."

Starting in 2013, Lin organized volunteers to collect information on the number of crabs, clean up the tidal lands where they live and propose initiatives to take them off restaurant menus.

"At first we called on people to protect the horseshoe crabs mainly in Beihai, but the locals were not even aware of the existence of the creature, let alone how to protect them," Lin said.

If the ancient species becomes extinct, the coastal ecosystem would be damaged and people's livelihoods will be affected, she said.

In addition to enhancing public awareness of protection, Lin's team also persuaded restaurants to announce that they would not serve Chinese horseshoe crabs. The government also joined her effort by awarding official complimentary plaques to those restaurants that don't serve the creature as a delicacy.

So far, 34 restaurants have made the promise.

"We now have a steady team of 40 volunteers from all walks of life, and local people tend to offer a helping hand instead of joking about our effort," Lin said.

She was listed among the 2018 Pew Marine Fellows awarded by The Pew Charitable Trusts, which aims to give a push to top scholars worldwide who are in midcareer to launch a marine protection program by offering $50,000 for three consecutive years.

"What I really want to achieve is to invite more people into our camp to care about the rare species and protect the ecology that we both live in," Lin said.