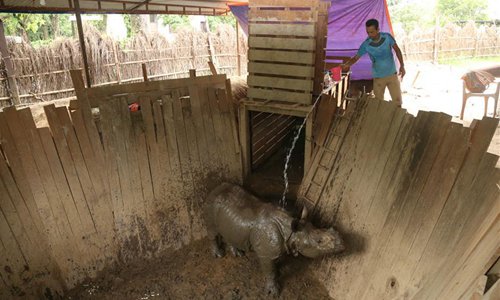 A one-horned rhino named "Rupasi", which will be gifted to China, being cooled off by her caretaker inside the premises at Chitwan National Park, Chitwan, Nepal, July 9, 2018. A couple of rhinoceros named as "Bhadra" and "Rupasi" are being transported to China this week as gifts from the Nepali government. （Photo/Xinhua）

The permission of trade and use of rhinoceros, tigers and related products under special circumstances in a latest government circular was based on a complete control system and adequate resources, a Chinese expert said Tuesday.

The adjustment would also help crack down on black market trade as people in need of these materials and products will buy them through legal channels, said Zhang Wei, a professor from the college of wildlife resources at Northeast Forestry University in Harbin, capital of Northeast China's Heilongjiang Province.

"It not only strictly limits the scope of special circumstances and formulates a series of strict supervision measures, but also strengthens law enforcement, which plays a more effective and positive role in global rhinoceros and tiger protection," Lu said.

The adjustment came 25 years after the country issued a total ban on rhinoceros and tiger bones in 1993.

According to a new circular by the State Council, the country has lifted the bans in special circumstances including scientific research, resource investigation, education, life-saving medical treatment, relics protection, cultural exchanges and law enforcement.

The announcement was not universally welcomed.

"With wild tiger and rhino populations at such low levels and facing numerous threats, legalized trade in their parts is simply too great a gamble for China to take," read a statement the World Wide Fund sent to the Global Times.

Zhang argued that the adjustment will not affect the protection of the wild rhinoceros and tiger, not to mention that hunting wild animals will be heavily punished in China.