Xi said that each pilot FTZ has forged ahead and made great progress during the past five years.

A large number of institutional innovations have been extended to the whole country, serving the role of testing fields for comprehensively deepening reforms, he added.

Xi urged to further improve the development of the pilot FTZs and reach more institutional innovations that can be replicated and promoted.

He noted that pilot FTZs should lead a new era of reforms and opening-up, making great contributions to realize "two centenary goals" and the Chinese dream of the great national rejuvenation.

Chinese Premier Li Keqiang pointed out the pilot FTZs were actively explored and innovated under the cooperation of local departments during the past five years, making significant progress in many aspects. The results should be fully affirmed.

Guided by Xi Jinping's Thought on Socialism with Chinese Characteristics for a New Era, the premier hoped the building of pilot FTZs would conscientiously implement the decisions and arrangements of the CPC Central Committee and the State Council, adhere to the new development concept and promote the reforms and innovative development.

We must focus on solving deep-seated contradictions and structural problems, strengthen reform planning and system integration, continue to pay close attention to system innovation and accelerate the formation of new advantages in development and competition, he added. 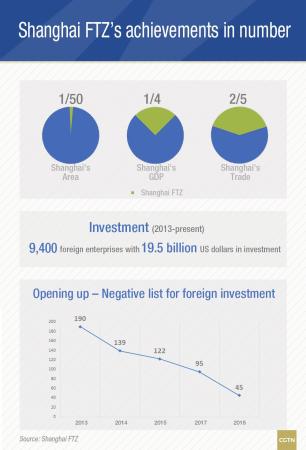 Li also called for more building experience of the pilot FTZ that can be replicated and promoted in a broader scope to duly play its role of a spearhead in the reforms and opening-up and a pioneer in innovative development.

The Shanghai FTZ was the first one in China, covering an area of some 120 square kilometers. It includes four initial bonded zones, as well as three expanded areas.

The zone is being used as a testing ground for a number of economic and social reforms nationwide. It has been pivotal in a variety of financial opening up projects.

After the Shanghai FTZ, China then set up a series of other free trade areas. They are located in two municipalities, five coastal provinces and four inland provinces. As one of them, the Hainan Pilot Free Trade Zone was approved earlier this year. These free trade zones point to China's determination to open wider to the world.