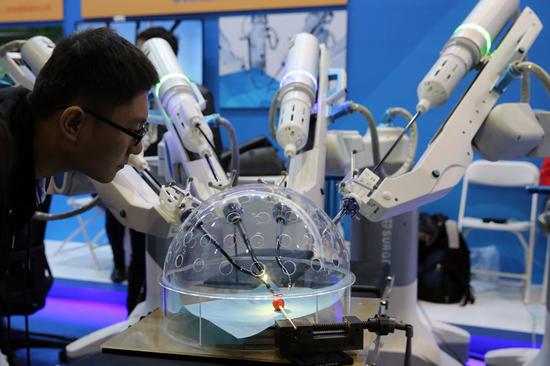 A visitor checks out a medical robot conducting simulated surgery on a grape at the opening of the Zhongguancun Innovation and Entrepreneurship Festival in Beijing. (Photo by Wang Zhuangfei/China Daily)

China leads the world in 32 out of 138 research topics in groundbreaking natural and social science fields, second only to the United States, according to the Research Fronts 2018 report published on Wednesday.

The results were based on analysis of research fronts－a cluster of highly cited papers over a five-year period－which can help determine areas where key work is being done and where the scientific community is most active. This allows researchers and officials to identify scientific trends and areas of possible collaboration.

Last year, China led in 25 topics in the report, which was compiled by the Chinese Academy of Sciences' Institute of Science and Development and Clarivate Analytics, a global analytics firm. The report has been published annually since 2014.

In 2018, the U.S. topped the world, leading in 82 topics. Germany and United Kingdom ranked third and fourth, leading in six and four fields, respectively.

"Our scientific development has entered a new era," Zhang said, adding that grasping future research trends in key fields is crucial to serving the nation's innovation and development strategies.

The report's research fronts are divided into 10 broad areas. Of those, the U.S. leads in eight in research activity and influence, while China leads in two, chemistry/materials sciences and math/computer sciences.

Chemistry/material sciences is also a fiercely contested field between China and the U.S., in which both countries are highly active and influential. China has a slight edge over the U.S. so far in 2018.

However, China is noticeably behind the U.S. in terms of active research in fields such as clinical medicine, astronomy and astrophysics. It also needs to put more effort into researching economics, psychology and other social sciences fields, the report said.