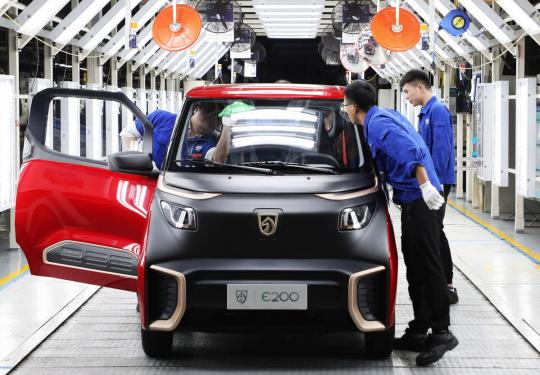 Employees check a new energy vehicle that is about to roll off the production line of a General Motors factory in Qingdao, Shandong Province. (Photo provided to China Daily)

The Chinese authorities' ramped-up efforts to promote high-quality development in the new energy vehicle sector, reflected by the most recent release of an updated list on NEVs to enjoy exemptions of vehicle and vessel tax, will further help boost the healthy development of the sector and also promote clean energy consumption, industry insiders said.

The vehicle and vessel tax, paid annually by car or ship owners, varies between hundreds of yuan to thousands of yuan, depending on engine sizes and the capacity of vehicles or ships.

Moreover, the list has extended tax cuts to more NEVs compared with the previous list, and makes higher requirements on the performance of the NEVs to be included, such as lower power consumption per 100 kilometers, the increased energy density of battery packs, and a higher cruising range, according to Cui Dongshu, secretary-general of the China Passenger Car Association.

"The new list mirrors the progress of China's NEVs, especially in key performance indicators, and such progress is driven by incentives from the Chinese authorities," Cui said.

"It is obvious Chinese NEVs have been making remarkable progress in high-quality development, and this will continue."

The Chinese authorities announced cuts in vehicle and vessel tax on vehicles and ships that use new energy or engines smaller than 1.6 liters as early as in 2012 and 2015, in a bid to save energy and combat pollution.

Since 2018, with an updated policy, the authorities have been rolling out lists of specific NEVs and small engine vehicles regularly for them to get tax cuts or exemptions.

Cui said the extended tax exemption to more NEVs this time will especially better support the development of commercial NEVs, whose owners are more sensitive to prices and taxes, because they usually own a large number of such vehicles.

Inclusion into the newest tax exemption list also endorses the quality and technical capabilities of such NEVs, which will help the manufactures to build brand image and attract customers, he said.

Qiu Kaijun, an industry observer and founder of Evobserver, an influential social media platform in the NEV industry, said the vehicle and vessel tax cut measures are part of the authorities' broader efforts to boost the development of the NEV industry, as they aim to encourage purchases of NEVs, although the effects are not as influential as other incentives including financial subsidies and rebates of purchase tax.

The NEV industry in China has been developing very fast in recent years, as the country pushes forward with efforts to build a globally competitive automobile industry.

For the January-May period this year, China's NEV production and sales reached 480,000 units and 464,000 units, up 46 percent and 41.5 percent year-on-year, respectively, according to Xin Guobin, vice-minister of industry and information technology.

China had 340 million motor vehicles by the end of June this year, while the number of NEVs had reached 3.44 million, according to figures released by the Ministry of Public Security on Wednesday.