Carriers to offer next generation Wi-Fi services this year 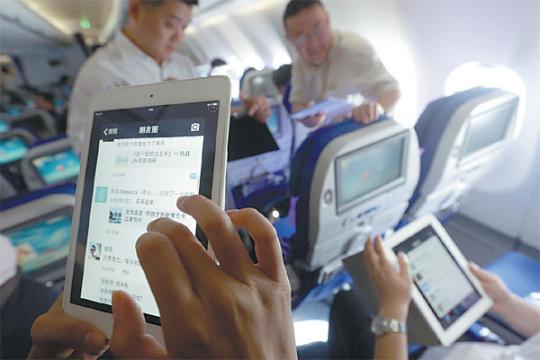 Passengers use WiFi services to surf Internet on mobile gadgets on a flight of China Eastern Airlines. (Photo by Liu Xin/For China Daily)

The next-generation in-flight Wi-Fi services, which will provide similar internet speeds and consistency of home and office networks, is likely to be available later this year on domestic and international flights of Chinese airlines.

US aerospace company Honeywell and Beijing-based Air Esurfing Information Technology Co Ltd (ARE) signed a cooperation agreement this week in Beijing, giving Chinese carriers access to high-speed in-flight Wi-Fi services that rely on the Ka band. ARE will be responsible for software development, local distribution and discussions with airlines.

The new services will be 10 to 100 times faster than the current available in-flight Wi-Fi that uses the Ku band. Adapted and customized to the China market, the new services will provide broadband data connectivity and significantly lower the costs.

"We have been in touch with more than 40 Chinese airlines, and all of them are very interested in installing the new in-flight Wi-Fi services. Air China is hopeful of becoming one of the largest customers," said Guo Man, president of ARE.

"The change from the current available in-flight Wi-Fi to the new one is like the improvement from 2G to 4G. The costs will be lowered as well, and we are aiming to provide Wi-Fi services that are affordable or even free to everyone in the future," he said.

Aviation officials from China are yet to approve the use of Wi-Fi services reliant on Ka band. Honeywell and ARE believe that once the solution comes out, the authorities will support the idea, to meet the growing demand from passengers.

Currently, about 300 aircraft in China, which make up for less than 10 percent of the total fleet, are equipped with Wi-Fi services. The current one that relies on Ku band is susceptible to instability and lost connections during a flight, especially when the airplane is flying over oceans.

"I am bullish on the growth potential of such Wi-Fi services in China. It will give Chinese airlines a competitive edge in a globalized market," said Steven Lien, Asia-Pacific president of Honeywell Aerospace.

"China plays a significant role in our global growth, and we are committed to working with local partners to help advance the country's aviation industry," he said.

The internet has become an essential part of life in China, and the idea of in-flight Wi-Fi is immensely popular among Chinese passengers. About 90 percent of those surveyed said the availability of in-flight Wi-Fi would influence their choice of airlines, according to an earlier report of Inmarsat, a London-based provider of global satellite communication services.