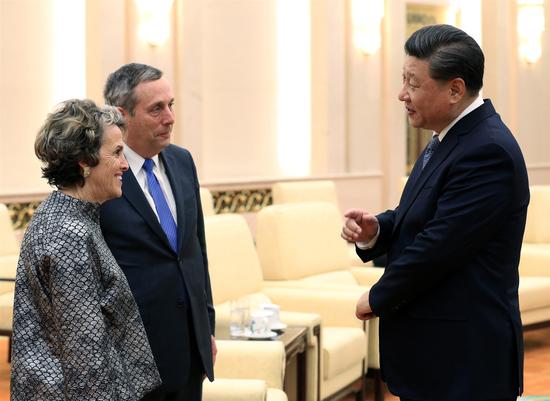 Xi made the remark during a meeting with Harvard University President Lawrence Bacow at the Great Hall of the People in Beijing.

Xi said China advocates mutual learning, encourages its students to study overseas and supports exchanges and cooperation in education with other countries.

He said he hopes more positive outcomes can be achieved from people-to-people exchanges between China and the United States.

Bilateral exchanges and cooperation in education are important for China-U.S. relations because they help enhance public support for those relations, he said.

Xi added that he is glad that U.S. President Donald Trump also voiced his support for bilateral exchanges and cooperation in education during their meeting at the G20 Summit in Argentina in December.

The rising level of education has been a major contributor to China's rapid development in its 40 years of reform and opening-up, he said.

China remains committed to advancing the modernization of its education, making itself an education powerhouse and developing education that people are satisfied with, he added.

During this process, China is willing to conduct broader exchanges and cooperation with education and research institutions including Harvard University, he said.

Bacow, who last year became the 29th president of Harvard University, said he is glad to make China his first overseas stop since his inauguration.

The visit was not only for Harvard but also on behalf of all of U.S. higher education in order to promote bilateral educational exchanges, he said.

"I am here precisely because, like you, I believe these ties are extremely important for our academic institutions, but even more importantly, for our nations," he said.

He noted that there are a large number of overseas students from China at Harvard, and the Chinese language is among the most popular foreign languages at the institution.

He also expressed his admiration for the great emphasis the Chinese government has placed on education and its efforts to enhance higher education, adding that Harvard University is ready to move forward with exchanges with Chinese education and research institutions.