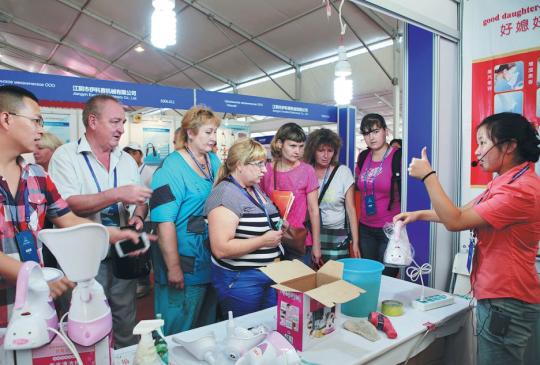 Many people quit their jobs to plunge into business and make money after China's reform and opening-up policy was launched in 1978.

The wave of small startups spread to Mudanjiang, in northeastern China's Heilongjiang province, which shares a border of about 200 kilometers with Russia, and many have prospered on cross-border trade.

Yang Shixin, a 51-year-old from Suifenhe, a city that forms part of Mudanjiang, owes her fortune to the policy.

Suifenhe, just 190 km from Vladivostok, the largest harbor city in the Russian Far East, has become the bridgehead for Sino-Russian trade. Civil trade markets, where individuals from the two countries could barter goods, opened there in the 1980s, and Russians flooded in to exchange goods with Chinese in the 1990s, when the markets were flourishing.

"In 1991, for the first time, I gave a box of underwear in exchange for a piece of woolen cloth at the Sino-Russia trade center," Yang said.

"Then I sold the woolen cloth for 100 yuan to Chinese buyers, while the underwear cost me just 5 yuan. I earned my first profit and it was unimaginable because my salary as a saleswoman at the then State-owned supply-marketing cooperative was 84 yuan a month."

Yang visited the trade center nearly every day after that "incredible" experience.

"In the 1,000-square-meter outdoor barter trade center, Chinese stood behind counters that formed circles, from inside out, and Russians gathered inside the circles to exchange goods such as coats and Russian nesting dolls," she said.

"To enter the center and use a counter, we needed to buy tickets, usually priced 5 to 10 yuan, from the industrial and commercial administration."

The tickets went on sale at 3 am and demand was so high that Yang had to wait in line from 11 pm to make sure she got one. She also needed to find time to trade after work.

In 1993, despite opposition from her family, she quit her job, which they regarded as an "iron rice bowl" with guaranteed employment and good benefits, to start her own underwear business, which made her about 60,000 yuan a year.

By 2006, her annual profit had increased to about 1 million yuan, and she was able to buy a 90-square-meter apartment in Beijing.