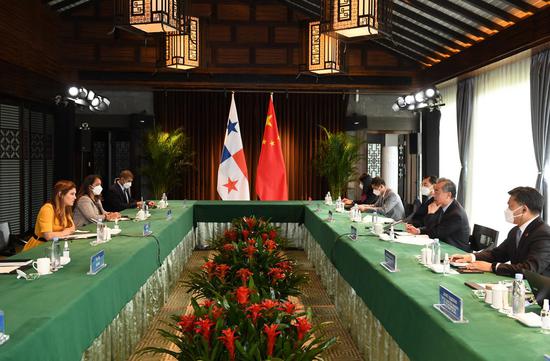 Chinese State Councilor and Foreign Minister Wang Yi and Panamanian Foreign Minister Erika Mouynes on Monday exchanged congratulations on the fifth anniversary of the establishment of diplomatic ties between the two countries.

Since the establishment of diplomatic ties five years ago, under the strategic guidance of the two heads of state, China-Panama relations have developed rapidly, with deepening political mutual trust, steady progress in cooperation in various fields and growing friendship between the two peoples, he added.

Noting that China attaches great importance to China-Panama relations, Wang said China is ready to work with Panama to implement the important consensus reached by the two heads of state, and take the fifth anniversary of the establishment of diplomatic ties as an opportunity to realize the "four-wheel drive" of political mutual trust, practical cooperation, cultural and people-to-people exchanges, and multilateral coordination, so as to promote sustained and in-depth development of China-Panama relations.

During Mouynes' visit to China in April, the two sides agreed to translate the correct decision of establishing diplomatic ties between the two countries into more concrete outcomes, Wang said, adding that China is ready to work with Panama to this end.

In her message, Mouynes said on this historic day, she is glad to see that the two sides have established friendly, smooth and mutually respectful relations, and bilateral cooperation has been fruitful.

She thanked the Chinese side again for the warm reception during her first visit to China, saying that the visit is of great significance, as the two sides had an in-depth exchange of views on bilateral political dialogue and cooperation in fields including trade and investment.

The Panamanian side believes that the potential of bilateral relations will be fully tapped, she added.

The Panamanian side is ready to work with the Chinese side to promote bilateral economic, trade, cultural and people-to-people cooperation, and expand cooperation in new areas such as environment, energy transformation, new technologies and education, said Mouynes.