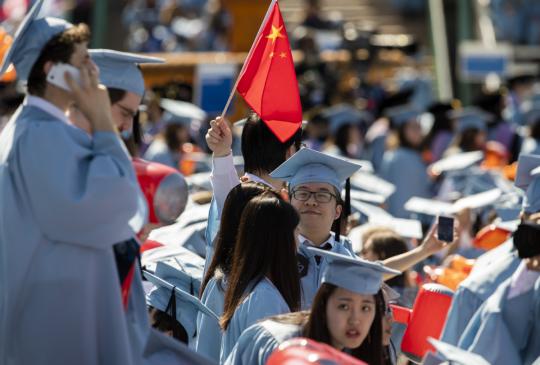 A senior U.S. State Department official said that efforts are being made to reduce barriers and cut waiting times for Chinese applying for student visas after enrollments from China dropped in the 2021-22 school year.

The number of students from China — the top place of origin among international students in the United States — was nearly 9 percent below that of the previous year.

At a Nov 9 news conference for the Open Doors 2022 Report on International Educational Exchange, which was released on Monday to mark International Education Week, Ethan Rosenzweig, deputy assistant secretary of state for academic programs, said that the Biden administration has been "very clear" that Chinese students are welcome in the U.S..

U.S. President Joe Biden has kept intact a proclamation issued in May 2020 by his predecessor, Donald Trump, which asks U.S. consular officers to deny visas to Chinese students and researchers deemed "security threats" for alleged links to the Chinese military.

Asked about the concerns and difficulties of Chinese students in obtaining visas in the STEM (science, technology, engineering and math) fields, Rosenzweig said he understood that those issues are "on everybody's mind".

In the fiscal year that concluded on Sept 30, U.S. embassies and consulates worldwide issued nearly 600,000 student visas, 65,000 of which went to Chinese students, according to Robert Batchelder, a consul general at the U.S. State Department.

In June, the peak time for students to apply for visas to prepare for the start of the fall semester, the U.S. issued 18,860 F-1 visas to Chinese nationals, down from 34,001 for the same period in 2019, according to State Department data.

"In STEM fields, I know there's a concern that applicants are scrutinized closely and that many of them are denied," Batchelder told China Daily. He said some perceptions about visa applications were "unfounded" and the scrutiny of and difficulty in student visa applications in China are no more difficult or complicated than elsewhere in the world.

The May 2020 presidential proclamation applies to a "very small handful of people, like maybe a couple in a week", he said. The "vast, overwhelming" majority of Chinese students who are looking to study in the U.S., including in STEM fields, are able to get their visas "without any serious delays or complications", he said.

But on the ground, even students who have been issued visas have experienced ordeals when landing on U.S. soil.

In late September last year, the Chinese embassy in the U.S. "lodged solemn representations" with the U.S. about what happened to a Chinese student, who, with a valid visa issued by the U.S. government, was deported after being "wantonly" interrogated at the border entrance and confined in a small room for more than 50 hours.

While the pandemic depressed study-abroad numbers, the tensions between China and the U.S. have also been felt in the student programs between the two countries.

It also showed that after recording a nearly 15 percent drop in the number of international students from China in the 2020-21 academic year, the biggest decline in a decade, U.S. colleges and universities continued to see the ranks of Chinese students shrink; this academic year, by 8.6 percent.

At 290,086 students, China remained the top-sending country to U.S. campuses, which continue to prioritize recruitment in the country, Rosenzweig said.