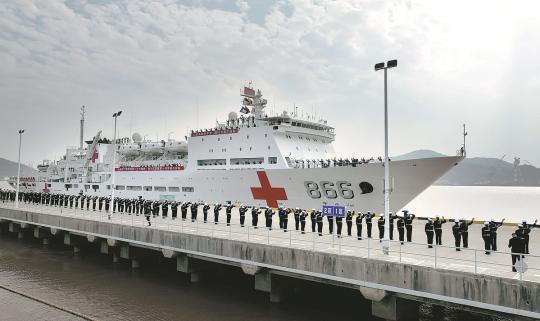 Navy sailors see off the Peace Ark hospital ship at a port in Zhoushan, Zhejiang province, on Nov 2, 2022. The ship will sail to Indonesia for Mission Harmony-2022, during which it will provide medical services to residents and overseas Chinese in the treatment of common diseases and surgeries if necessary. (Photo by CHU CHENGTAO/For chinadaily.com.cn)

Among the services it provides are surgeries and diagnoses and treatment of frequently occurring diseases, the People's Liberation Army Navy said in a news release on Friday.

On Friday, the first day of the week of free services, hundreds of local people went to the hospital ship at the wharf in Jakarta's Tanjung Priok port for diagnosis, the Navy said. The following day, four local people underwent surgeries conducted on the vessel by five doctors and three nurses.

The Chinese Navy said the mission is of great importance in demonstrating China acting as a responsible major country with a peace-loving military, and to further deepen the friendly relations between China, Indonesia and their militaries.

Rear Admiral Qiu Wensheng, commander of Mission Harmony-2022, outlined the achievements made in the countries' bilateral relations in recent years at a welcoming ceremony in Jakarta on Thursday, noting that China and Indonesia have a long history of exchanges.

He said the crew of Peace Ark would continue to operate in the Red Cross' spirit of "humanity, fraternity and dedication" and serve the Indonesian people with superb medical skills.

Deng Qiang, captain of Peace Ark, had taken part in such missions four times before. He said all of the ship's sailors would resolutely fulfill their mission and contribute to safeguarding world peace and promoting common development and the building of a community with a shared future for mankind.

"We have cared for life, sown the seeds of friendship throughout the world and maintained world peace by healing the wounded and rescuing the dying, which is humanitarian," Deng said.

Peace Ark was commissioned in 2008. The vessel is the Chinese military's first hospital ship that has a displacement of more than 10,000 metric tons. It has engaged in nine overseas missions, sailing about 240,000 nautical miles and serving more than 230,000 people in 43 countries and regions around the world, the Chinese military said.