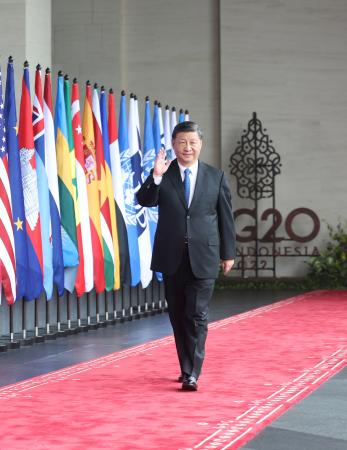 President Xi Jinping walks to the venue of the 17th summit of the Group of 20 in Bali, Indonesia, on Tuesday. Xi delivered a speech titled "Working Together to Meet the Challenges of Our Times and Build a Better Future" at the summit. (JU PENG/XINHUA)

President Xi Jinping emphasized on Tuesday the need to make global development more inclusive, beneficial to all and more resilient, as he called on Group of 20 members to lead by example in promoting common development and jointly improving the well-being of mankind.

In a speech delivered at the first session of the 17th G20 Summit in Bali, Indonesia, Xi underlined food and energy security as the most pressing challenges in global development, calling upon nations to resolutely oppose attempts to politicize food and energy issues or use them as tools or weapons.

"We meet at a time of momentous changes unseen in a century, changes that are consequential to the world, to our times, and to history," Xi told a roomful of global leaders from economies that represent over 80 percent of global GDP, 75 percent of international trade and 60 percent of the world's population.

Xi noted challenges including the lingering COVID-19 pandemic, the tense geopolitical environment and severely inadequate global governance, saying that the food and energy crises have compounded each other.

"All countries should replace division with unity, confrontation with cooperation, and exclusion with inclusiveness," he said.

He emphasized that drawing ideological lines or promoting group politics and bloc confrontation will only divide the world, and hinder global development and human progress.

"No one should engage in beggar-thy-neighbor practices, building 'a small yard with high fences', or creating closed and exclusive clubs," the president said.

He called upon developed nations to provide more public goods and all major countries to do their best for the cause of global development.

Xi announced that Beijing will increase its commitments to the China-UN Peace and Development Fund, and the nation will make a list of items for practical cooperation, set up an open-ended pool of projects under the Global Development Initiative, and draw up a road map for the initiative's implementation.

"We need to build a global partnership for economic recovery, prioritize development and put the people at the center, always keep in mind the difficulties faced by developing countries, and accommodate their concerns," he said.

He expressed China's support for letting the African Union join the G20.

As part of the effort to continue deepening global cooperation on fighting the pandemic, Xi highlighted the need to raise the accessibility to and affordability of vaccines, medicines and diagnostic and treatment methods in developing countries to better facilitate economic recovery.

Xi underlined that the root cause of the ongoing food and energy crises does not lie in production or demand, but in disruptions to supply chains and international cooperation.

He pointed out that the way out of the crises is for all countries to enhance cooperation on market supervision and regulation, build partnerships on commodities, develop an open, stable and sustainable commodities market, and work together to unclog supply chains and stabilize market prices.

Unilateral sanctions must be removed and restrictions on relevant scientific and technological cooperation must be lifted to solve the issues, he added.

Indonesian President Joko Widodo, the chair of the summit, emphasized the need to immediately take steps to ensure sufficient availability of fertilizer at an affordable price, warning that high food prices could worsen, leading to a food supply crisis.

He also underlined the responsibility of the G20 leaders not only to their own people but also for all the world's people. "We should not divide the world into parts. We must not allow the world to fall into another Cold War," Widodo said.

IMF Managing Director Kristalina Georgieva highlighted the need to remove trade barriers for food and fertilizers to counter the suffering of hundreds of millions of people.

"We must not allow protectionism to take root, and the world to drift into separate blocs," she said, adding that the organization's calculations indicate that a world divided would lose at least 1.5 percent of GDP annually.

Lili Yan Ing, lead adviser at the Economic Research Institute for ASEAN and East Asia, a think tank in Jakarta, said the commitments of President Xi and China, one of the world's largest economies and political powers, are crucial to ensuring global political and economic stability.

China's commitments are particularly important because the nation has the resources, institutions and human capital to solve pressing issues, she said.