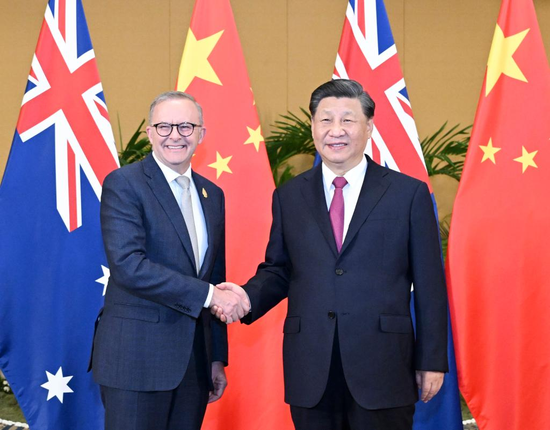 China-Australia relations have encountered difficulties in the past few years, which both sides do not want to see, Xi said.

China values Australia's recent willingness to improve and develop bilateral relations, Xi said, adding that the two sides enjoy huge potential in economic and trade cooperation, and voicing hope that Australia will provide a sound business environment for Chinese enterprises to invest and operate in Australia.

For his part, Albanese noted that Australia and China will soon celebrate the 50th anniversary of the establishment of diplomatic relations.

Australia, he said, is willing to uphold the commitment made when establishing the diplomatic relations with China, work with China in the spirit of mutual respect and equal cooperation, and reduce their differences through constructive and candid dialogue and communication, so as to promote the steady development of Australia-China relations, and carry out more cooperation on climate change, economy and trade and other important issues.