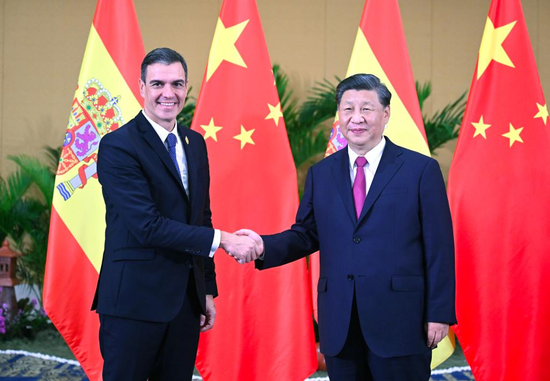 Noting that the two countries will celebrate the 50th anniversary of diplomatic relations next year, Xi said the China-Spain relationship has enjoyed sound and smooth growth over the past five decades, which is attributed to their commitment to the founding principles of mutual respect, equality and mutual benefit, and to the right path of friendly interactions between countries with different cultures and systems.

The pursuit of Chinese modernization and high-quality development in China will bring new development opportunities for Spain and countries all over the world, Xi said, adding that China stands ready to work with Spain to promote their comprehensive strategic partnership to a new level.

It is important for the two sides to have mutual understanding and mutual support on issues concerning each other's core interests such as sovereignty, security, development and dignity, Xi said.

China welcomes more Spanish companies and goods in the Chinese market and hopes that Spain will treat Chinese companies in a fair, just, transparent and non-discriminatory way, he said.

China is ready to enhance coordination and collaboration with Spain within the Group of 20 (G20) and other multilateral platforms to jointly cope with such challenges as climate change, and energy and food security, Xi said, adding that it is hoped that Spain will play a positive role in promoting the healthy and steady growth of China-Europe relations.

For his part, Sanchez congratulated Xi once again on his re-election as general secretary of the Central Committee of the Communist Party of China.

He expressed full endorsement of Xi's proposal at the G20 Summit for tackling global challenges with solidarity and cooperation and promoting more inclusive global development, saying that China has all along been a force for stability of the international order.

Since the establishment of diplomatic relations almost five decades ago, the two countries have achieved fruitful results in bilateral cooperation, Sanchez said, adding that Spain will seize the opportunities of the 50th anniversary to promote greater progress in the Spain-China comprehensive strategic partnership.

Spain is prepared to strengthen high-level interactions with China, promote exchanges and cooperation in such areas as trade, investment, culture and climate response, provide more facilitation for Chinese businesses that go to Spain for investment and cooperation, and actively promote dialogue and cooperation between Europe and China in various fields, he said.

Ding Xuexiang, Wang Yi and He Lifeng, among others, were present at the meeting.