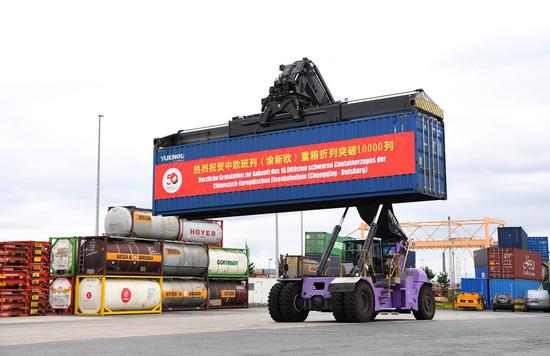 As the world fixes its gaze on the G20 Summit in Indonesia, a broad consensus has emerged that major economies like China and the European Union (EU) need to work together towards economic cooperation so as to facilitate global economic recovery and sustainable development.

Chinese President Xi Jinping met with French President Emmanuel Macron, Dutch Prime Minister Mark Rutte and Spanish Prime Minister Pedro Sanchez in Indonesia's resort island of Bali on Tuesday. Xi said that China and the EU should adhere to the spirit of independence and autonomy, as well as openness and cooperation to push bilateral relations for steady progress on the right track and inject stability and positive energy into the world.

In 2021, the China-Europe freight train service ran a record 15,000 trips, carrying goods equivalent to 1.46 million pieces of 20-foot container units. This represented a 22-percent and 29-percent growth from the previous year, respectively, according to China State Railway Group Co., Ltd..

During the first six months of 2022, the service ran 7,514 freight train trips, transporting goods equivalent to 724,000 pieces of 20-foot container units, data from the company showed.

The China-Europe freight train service has served as an important trade link between Asia and Europe. With 82 routes, the trains now reach 200 cities in 24 European countries, forming a transport network covering the whole of Europe, said the company.

The trains transport over 50,000 types of goods in 53 categories, including automobiles and parts, clothing and accessories, and grain and timber, thus helping stabilize the international supply chains.

"Especially during this difficult times, when we also struggle with the congestion of some sea routes, the China-Europe freight train service still functions effectively," said Axel Mattern, chief executive officer of Port of Hamburg Marketing, adding that he was looking forward to welcoming more trains from China.

By the end of July this year, the overall ratio of laden containers travelling in both directions have been around 98 percent, according to data released by China's National Development and Reform Commission in August.

The freight train service has also helped build many new logistics centers and industrial and trade parks along the routes, thus creating tens of thousands of jobs locally.

As one of the gateways to the EU, the town of Zahony in northeastern Hungary has become an important hub along the southern line. It is situated within 100 km to five borders, which makes it an ideal location for a logistics center.

Engrossing a lot of attention at the G20 summit, win-win cooperation between China and the EU boasts broader prospects for future development.

Hailing globalization as a success, German Chancellor Olaf Scholz said Germany did not advocate decoupling during his official visit to China earlier this month, stressing that Germany must do business with the rest of the world, including China.

Valdis Dombrovskis, the executive vice-president of the European Commission, said that the EU's trade relations with China "need more balance and reciprocity" and "the EU should continue engaging with China with pragmatism."

Despite a multitude of international political and economic challenges, including the COVID-19 pandemic, China-EU economic and trade cooperation has been improving both in diversity and volume.

Recalling the past 50 years of Chinese-German economic and trade relations, Duisport CEO Markus Bangen has expressed confidence in the resilience of beneficial cooperation between the two countries. "We look forward to more cooperations in the future."

Denis Depoux, global managing director of Roland Berger, has also commended the stability of bilateral economic and trade relations in the face of a wobbly global economy that has been weakened by rising inflation, energy shortages and supply chain disruptions throughout 2022.

"Despite the challenging circumstances, China-EU economic and trade cooperation has managed to maintain growth momentum and has played a key role in driving the global economic recovery," he noted in a report on the development of Chinese enterprises in the EU.

STRONGER BONDS TO BENEFIT THE WORLD

The two sides have also tapped potential of cooperation in the renewable energy sector. The wind farm operated by CGN Europe Energy, a subsidiary of China General Nuclear Power Group, in the French village Assac, not only provided clean energy for local residents, but also helped turn the village into a tourist attraction.

According to Pascal Gondrand, director for Japan &North-East Asia of Business France, China is France's number one Asian investor, with 53 projects creating or maintaining 2,169 jobs in 2021.

He saw a role for France, which already functions as a hub for businesses in Europe and the Europe, Middle East and Africa region, to work together with China in the third-party market to promote sustainable growth.

As this year marks the 50th anniversary of China-Germany diplomatic relations, Oliver Zipse, chairman of the Board of Management of BMW AG, said: "Our experience in China is a good example of successful collaboration between the two countries and between China and Europe. From our perspective, collaboration and mutual trust are key to addressing the ongoing challenges that lie ahead for all of us. And they are key to creating growth and prosperity."

His view was echoed by Former World Trade Organization Director-General Pascal Lamy, who said that given the disastrous impact of climate change on the global environment and economy, the EU and China should join hands to reduce carbon emissions.

Speaking at an economic forum in Paris in September, Raffarin also urged France, Europe and China to find a way to steer their relationships towards multilateralism and cooperation.

"We have a vision of a multipolar world. We want a balanced global governance for which we have to reinvent multilateralism. Let us talk. Let us dialogue," Raffarin said.

"The more cooperation there is, the more we can limit tensions," he added.