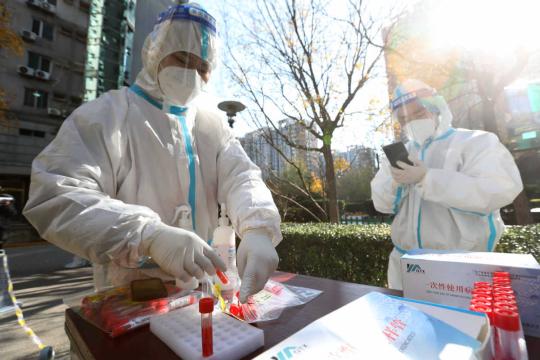 The number of COVID-19 infections in Beijing has continued to trend upward in recent days, involving most districts, a senior official said on Monday.

Xu Hejian, spokesman for the municipal government, said at a news conference on Monday that people should be aware of the capital's severe and complicated epidemic situation and that the government will strengthen accurate and scientific prevention work.

Without going into details, he said that entities such as schools, construction sites, hospitals, nursing homes, restaurants and logistics companies should make plans for their epidemic control and prevention measures.

"The services for quarantines, nucleic acid tests, medical treatment and vaccinations will be made more accurate with improvement," Xu said.

Authorities are encouraging families and friends of those in nursing homes not to visit if it's not absolutely necessary, to avoid cluster infections.

Beijing recorded 257 new local COVID-19 cases between midnight and 3 pm on Monday, among whom 43 were detected at the community level, involving 10 districts, according to Liu Xiaofeng, deputy director of the Beijing Center for Disease Prevention and Control.

Many residents in Beijing's Chaoyang district, the hardest-hit district in the city, said their regular nucleic acid testing sites had shut or were open fewer hours on Monday, resulting in long queues stretching around city blocks.

Meng Rui, deputy head of Chaoyang, said that the authority had optimized the "location arrangement" of the testing sites, based on a related requirement for low-risk areas.

"In fact, the district has 1,824 testing sites in total after the adjustment, 100 more than the previous number," he said. "The locations are closer to people's residential communities, which is helpful to identify the risks faster if positive cases are found."

Yin Li, Beijing's newly appointed Party chief, hosted an epidemic control and prevention work meeting on Monday morning. He said all efforts will be made to reduce the impact of the epidemic on the city's economic and social development and to protect people's safety and health.

In Haizhu district in Guangzhou, Guangdong province, a notice issued by the COVID-19 control and prevention headquarters said progress had been made in the past three days after prevention and control measures were strengthened on Friday.

However, based on the latest monitoring results, the risk of virus transmission has not been completely eliminated, with the epidemic situation in the district remaining uncertain, challenging and complex, according to Su Mingqing, deputy head of Haizhu. The official tally showed Haizhu reported 3,712 of the city's 4,065 infections on Sunday.

Residents living in closed-loop management areas are required to stay at home unless absolutely necessary. Outside these areas, residents are required to present negative nucleic acid test results from within 24 hours before leaving the district, according to the notice.

The adjustment of the prevention and control measures in the district was based on lowered risks of transmission outside the controlled areas, according to Su.

"The transmission chain is very clear and has been effectively handled outside the controlled areas, as only some sporadic cases at community level have been reported there," Su said during a news conference on Monday.