Xi, Biden try to put ties back on track 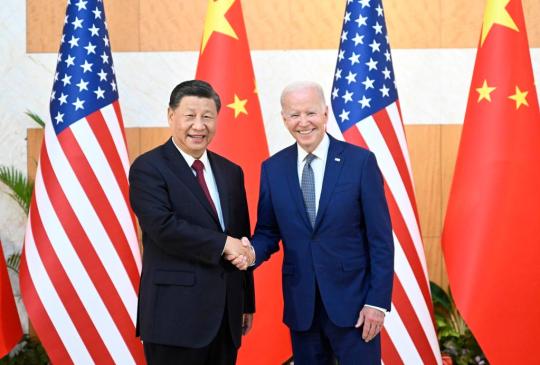 The two leaders had a meeting of about three hours on the sidelines of the G20 Summit in Bali, their first sit-down since Biden took office in January 2021.

Both nations pledged to enable their diplomatic teams to maintain strategic communications and frequent consultations as well as dialogue and coordination on macroeconomic policies, economy and trade, according to a summary of the meeting.

They both highlighted the significance of people-to-people exchanges between China and the U.S., pledging to expand the exchanges in personnel in various areas.

In his opening remarks, Xi highlighted the joint responsibility he and Biden had in anchoring the future direction of bilateral relations and placing ties on the right track.

"I look forward to working with you, Mr President, to bring China-U.S. relations back to the track of healthy and stable growth to the benefit of our two countries and the world as a whole," Xi said.

He pointed out that the current state of China-U.S. relations is not in the fundamental interests of the two countries and their people, and is not what the international community expects.

China-U.S. relations should not be a zero-sum game where one side outcompetes or thrives at the expense of the other, and the success of both nations should be seen as opportunities, instead of challenges, for each other, Xi said.

The world is big enough to accommodate the respective development and common prosperity of both nations, he added.

He called upon the two sides to put each other's domestic and foreign policies, as well as strategic intentions, in the right perspective, saying that bilateral interactions should be defined by dialogue and win-win cooperation, not confrontation and zero-sum competition.

China has never sought to reshape the current international order, or to interfere in the internal affairs of the U.S., and China has no intention of challenging or displacing the U.S., Xi said.

The two sides should respect each other, coexist in peace, pursue win-win cooperation, and work together to ensure that China-U.S. relations move forward on the right course without losing direction or speed, or still less having a collision, Xi added.

Xi gave a full account of the origin of the Taiwan question and China's principled position.

It is the common aspiration of the Chinese people and nation to realize national reunification and safeguard territorial integrity, Xi said.

Anyone who seeks to split Taiwan from China will be violating the fundamental interests of the Chinese nation, and the Chinese people will absolutely not let that happen, said the president.

The president expressed hope that Washington will match its words with action and abide by the one-China policy and the three joint communiques, and the U.S. side will act on its assurances with real effect.

Xi also explained to Biden China's whole-process people's democracy, saying that China has Chinese-style democracy just as the U.S. has American-style democracy, and both fit their respective national conditions.

He said the so-called "democracy versus authoritarianism" narrative is not the defining feature of today's world, and does not represent the trend of the times.

The president highlighted the vital importance of the two nations to recognize and respect differences in their paths and systems if they are to get along.

Neither side should try to remold the other in one's own image, or seek to change or even subvert the other's system, he said.

Even though the two sides have different histories, cultures, social systems and development paths, such differences should not become an obstacle to growing bilateral relations, he said.

The Chinese nation has the proud tradition of standing up for itself, and suppression and containment will only strengthen the will and boost the morale of the Chinese people, Xi said.

He stressed that starting a trade or technology war, building walls and barriers, and pushing for decoupling and severing supply chains all run counter to the principles of a market economy and undermine international trade rules.

He reiterated Beijing's opposition to politicizing and weaponizing economic and trade ties as well as exchanges in science and technology, saying that China and the U.S. share more, not less, common interests under current circumstances.

Xi underscored the need for both sides to promote post-COVID global recovery, tackle climate change and resolve regional issues through coordination and cooperation.

Conflicts and wars produce no winner, and confrontation between major countries must be avoided, he said, adding that China has all along stood on the side of peace and will continue to encourage peace talks.

Beijing supports and looks forward to a resumption of peace talks between Russia and Ukraine, and China hopes that the U.S., NATO and the European Union will conduct comprehensive dialogues with Russia, he said.

In his remarks, Biden underscored the responsibility that he and Xi share to show that China and the U.S. can manage differences, prevent competition from becoming near conflict, and find ways to work together on urgent, global issues that require mutual cooperation.

The U.S. side is committed to keeping the channels of communication open between the two presidents and at all levels of government to allow candid conversations on issues they disagree on, and to strengthen necessary cooperation and play a key role in addressing climate change, food security and other important global challenges, Biden added.

He reaffirmed that a stable and prosperous China is good for the U.S. and the world, adding that his nation respects China's system and does not seek to change it.

He offered assurances that Washington does not seek a new Cold War or to revitalize alliances against China. The U.S. does not support "Taiwan independence", does not support "two Chinas" or "one China, one Taiwan", and has no intention to have a conflict with China, he said.

He added that the U.S. side has no intention to seek decoupling from China, to halt China's economic development, or to contain China.

Xi arrived in Bali on Monday afternoon to attend the 17th G20 Summit.

He will leave for Bangkok on Thursday to attend the 29th APEC Economic Leaders' Meeting before making a visit to Thailand.