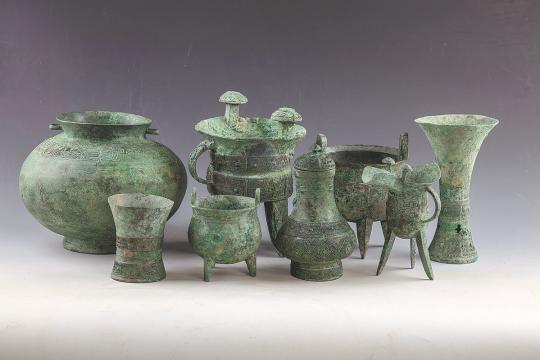 Almost a century after archaeological excavations began at the Yinxu in Anyang, Henan province, fruitful new findings are helping decode the early stages of Chinese civilization.

The 3,300-year-old site is best known as the home of exquisite ceremonial bronzeware and oracle bone inscriptions, the oldest-known Chinese writing system. The evolution of the characters written on the bones is also seen as an indication of the continuous line of Chinese civilization.

The inscriptions, mainly carved on turtle shells and ox bones for fortunetelling or recording events, show the Yinxu site to be the location of the capital of the late Shang Dynasty (c.16th century-11th century BC). The inscriptions also documented people's daily life.

In the text, people then praised their capital as Dayishang, or "the grand metropolis of Shang".

A funeral pit of Shang chariots and horse remains dug up from the Shaojiapeng site, 2.5 km south of the palace area of Yinxu. (Photo/China Daily)

Excavation findings at the site have been matched with the inscriptions to gain a more detailed picture of the Shang Dynasty, archaeologists working at Yinxu said at a news conference organized by the National Administration of Cultural Heritage in Beijing on Thursday.

Xu Lianggao, a researcher with the Institute of Archaeology under the Chinese Academy of Social Sciences, said the information helped confirm the location of key buildings and structures.

In an area where palaces and ancestral temples were believed to be located, new unearthed findings indicate a 60,000-sq-meter royal resort, including a lake with a central island, manmade waterways to the nearby Huanhe River and more architectural foundations.

"Our previous understanding of the layout of palaces in Yinxu has been refreshed," Xu said. "Images of the Shang civilization now become more vivid and are more complete."

A 15-meter-wide road north of the Huanhe River, and two other roads south of Yinxu's palace area were also found. Xu believes they were probably part of a complex road system.

Previous research has allowed researchers to determine basic structures, districts and various functions of the Yinxu site, Xu said. Interdisciplinary studies in recent years have deepened knowledge of Shang architecture, belief systems, handicraft industries, and many other fields, he added.

Excavation started in 1928 at Yinxu, one of the first modern archaeological projects in China run by local scholars. In the decades that followed, generations of leading Chinese archaeologists honed their skills at Yinxu.

"The site is just an incomparable milestone," Chen Xingcan, head of the Chinese Academy of Social Sciences' Institute of Archaeology, said. "Before the epoch-making finding of Yinxu, early Chinese history was widely doubted by Western scholars to have ever really existed. It (the find) then greatly enhanced Chinese people's cultural confidence."

In 2006, Yinxu was listed as a UNESCO World Heritage Site.

Archaeologists have also explored surrounding areas, and some nearby sites are probably even older than Yinxu, said Kong Deming, a researcher with the Anyang Institute of Cultural Relics and Archaeology.

Since 2020, a large cluster of bronzeware workshops has been discovered at Xindian site, about 10 kilometers north of Yinxu's palace area. More than 40,000 pieces of pottery molds, which were used to cast bronze, were unearthed along with many other tools.

About 2.5 km south of the palace area, three courtyard ruins have been found at Shaojiapeng site. The discoveries include 18 houses and a graveyard with more than 20 tombs and four funeral pits where chariots and horses are buried. "These findings give us a much bigger picture of Yinxu and about different clans living on this land then," Kong said.

"The findings may echo recordings on oracle bones on the Ce," Kong said, adding that there were believed to be official historians for the royal family.

These findings may also indicate that clans in the Shang Dynasty stuck with the same jobs.

"The idea of Yinxu as 'one' capital city may also be redefined," said Chen from the CASS. "It was possibly composed of a group of smaller satellite cities spread over a large area."

Some of the archaeological findings may indicate that Yinxu was part of a much bigger network of communication, trade, and shared learning among prehistoric civilizations.

Kong said unearthed bronze arrow heads and analysis of human bones in a graveyard on the Taojiaying site, 7 km north of Yinxu, indicated that nomadic people had been coming from northern grasslands, such as present-day Inner Mongolia.

Bones of bronze makers at the Xindian site indicate they may have migrated from the southern region by the Yangtze River. Pottery molds at the site match unearthed bronzeware from the Sanxingdui site in Sichuan province, about 1,300 km away.

"It is communication that makes cultures boom. Yinxu is our benchmark to better view other bronze civilizations of its time," Xu from CASS said.