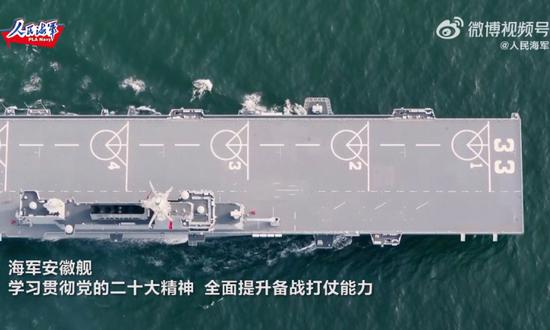 With the hull number 33, the Anhui carried out the exercises in an undisclosed sea region, the PLA Navy announced on Thursday.

This is the first time the PLA Navy has unveiled its third Type 075 amphibious assault ship and the vessel's name and hull number, observers said.

It indicates that the Anhui has been commissioned into the PLA Navy and is on its way to forming combat capabilities, a Chinese military expert who requested anonymity told the Global Times on Thursday.

With the experience gathered by the first two Type 075 amphibious assault ships, the Hainan and the Guangxi, the Anhui could achieve initial operational capability faster, the expert said.

The Type 075 amphibious assault ship is widely believed to be a vital instrument of the PLA Navy in safeguarding China's national sovereignty, security, territorial integrity and its development interests in the Taiwan question as well as the South China Sea issue, analysts said.

The Anhui was launched in Shanghai in January 2021, according to media reports.