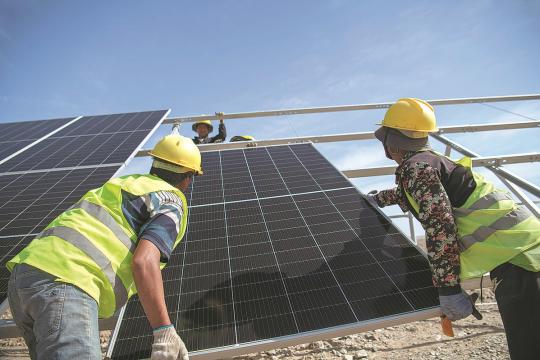 Employees assemble photovoltaic panels at the site of a new energy project in Zhangye, Gansu province, in June. [Photo/China Daily]

The active and prudent approach to climate actions that Xi Jinping has vowed China will pursue is suitable to the nation's conditions, with coal serving as the dominant fossil fuel reserve, experts said.

Though coal may still be China's major source of energy in the short term, they said, the country's booming renewable energy sector has created strong momentum that will help it embrace a much greener future.

They made the remarks after Xi delivered a pivotal report in Beijing on Sunday to the opening session of the 20th National Congress of the Communist Party of China. The report emphasized that respecting, adapting to and protecting nature is essential for building China into a modern socialist country in all respects.

Among the major points that Xi highlighted to promote harmony between humans and nature are accelerating the transition to a model of green development and working actively and prudently toward the country's climate targets.

China aims to peak carbon dioxide emissions before 2030 and achieve carbon neutrality before 2060.

"Based on China's energy and resources endowment, we will advance initiatives to reach peak carbon emissions in a well-planned and phased way in line with the principle of building the new before discarding the old," Xi said.

The country will use coal in a cleaner and more efficient way and speed up the planning and development of a system for new energy resources, he added.

Lin Boqiang, head of Xiamen University's China Institute for Studies in Energy Policy, said that China's energy supply is generally secure as the nation forges ahead to meet its climate targets, despite factors arising from the important role that oil and natural gas imports play in its energy structure.

"Compared with many other countries, China has a very secure energy supply system, mainly because of coal," he said.

Coal constitutes 94 percent of the fossil fuel reserves in China. Roughly 70 percent of the oil supply in China is imported, according to government statistics, and the country also depends on imports for 40 percent of its natural gas.

However, the country has continued to reduce the proportion of coal in its energy mix.

The share of coal use in China's primary energy mix stood at 56 percent in 2021, compared with 68.5 percent in 2012, according to the National Energy Administration.

The decreases occurred as the installed capacity for renewable energy grew persistently. For example, the combined installed capacity of wind and solar power across the country has reached 670 million kilowatts — almost 90 times the 2012 level.

China now leads the world in the generation capacity of hydropower, wind, solar and biomass energy.

Wang Yi, a researcher at the Chinese Academy of Sciences' Institutes of Science and Development, said he expects to see the country take a more coordinated approach regarding energy security, climate action and development.

Using coal in a more efficient and cleaner manner is among the first choices to ensure the country's energy security, on the premise of which the country can build a new energy system, he said.

Wang Weiquan, deputy secretary-general of the Chinese Renewable Energy Industries Association, said that using coal in a cleaner and more efficient way is not only about enhancing the combustion efficiency of the fuel, but also making the entire procedure from coal mining onward more eco-friendly.

In coal exploitation, for example, measures can be taken to promote comprehensive use of mine water and mash gas, increase coal recovery and beef up environmental and ecological remediation of mining areas, he said.

He said coal can also be used as a raw material for natural gas, methane and hydrogen.

Although it won't be easy to quickly move away from coal as a major energy source, there are positive signs that China can spearhead the global low-carbon transition.

Erik Solheim, former executive director of the United Nations Environment Programme, said about 82 percent of all solar panels and 70 percent of batteries for electric vehicles were made in China last year.

The nation now accounts for half of the global sales of electric cars, and 98 percent of the world's electric buses are running on roads in China, he added.

"It was hard for China to compete in the old, 20th century polluting industries, but it's much easier for China to leapfrog into the future," he said.