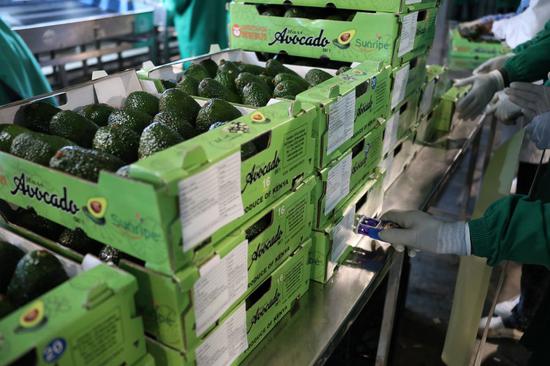 A staff member stamps the label on a box with fresh avocados at Sunripe factory in Limuru Town, Kiambu County, Kenya, on Aug. 2, 2022. The first batch of fresh avocados grown in Kenya and destined for the Chinese market was flagged off Tuesday at a ceremony attended by senior government officials, diplomats, and industry executives. Kenya became the first African country to export fresh avocados to China in a move set to further boost the economic ties between the two countries. (Xinhua/Dong Jianghui)

China will support and facilitate the entry of more high-quality and distinctive African agricultural and food products into the Chinese market, bringing more tangible benefits to the Chinese and African people, a Foreign Ministry spokesperson said Tuesday.

Spokesperson Wang Wenbin made the remarks at a regular news briefing in response to a query on the measures China will take to facilitate the import of agricultural and food products from African countries.

The Chinese government attaches importance to strengthening agricultural cooperation with Africa and actively promotes the import of agricultural products from Africa, Wang noted, adding that China is the second largest destination for African agricultural exports.

At the Eighth Ministerial Conference of the Forum on China-Africa Cooperation in November last year, China announced the establishment of a "green channel" for African countries' agricultural products entering China, Wang said.

Wang said the General Administration of Customs formulated and actively implemented several practical measures to facilitate access for such products.

First, the applications of agricultural products from African countries for entry into China are to be considered on a priority basis. After receiving relevant technical data, risk analysis is to be immediately started to accelerate the quarantine work needed for gaining access.

Third, China will facilitate the registration of African enterprises that have been approved for the import of agricultural products, adopting flexible methods such as video inspection or document review to speed up the assessment and registration process.

With the joint efforts of both sides, the trade in agricultural and food products between China and Africa will prosper and develop, he added.