Taiwan is now a touchstone issue for the UK, the U.S. and for us in China. This is how we see it 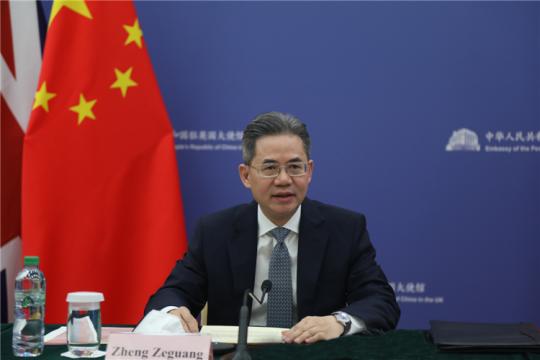 Over the past weeks, the world has seen the resolute response from China after the visit to Taiwan of U.S. House speaker Nancy Pelosi. Some people have asked why this is necessary. To understand, one needs to learn some history.

Taiwan has been an inalienable part of China's territory since ancient times. Throughout history, the island has been twice lost and regained. During the colonial expansion of western countries, it was occupied by the Dutch for 38 years before it was recovered in 1662 by Chinese national hero Zheng Chenggong. When imperial powers were carving up the world among themselves, Taiwan was subjected to Japanese occupation for 50 years. The Cairo declaration of 1943 and the Potsdam proclamation of 1945 made it clear that Taiwan should be returned to China.

Although the two sides of the Taiwan Straits have been caught up in prolonged political antagonism since 1949 as a result of the Chinese civil war, China has never been divided, the island has remained part of China's territory, and the historical and legal fact that the two sides of the Straits belong to the one and same China has never changed. The Chinese people will firmly safeguard, at any cost, their national sovereignty and territorial integrity. "Taiwan independence" means war and will lead to a dead end. Opposing and defeating such attempts is meant to avoid war and safeguard peace and stability in the region.

That is why China strongly opposed and had been repeatedly warning against the provocative visit of the U.S. House speaker, a move that seriously infringed upon China's sovereignty and territorial integrity.

Over the years, the U.S. has been playing the "Taiwan card" to contain China by approving arms sales to the island, upgrading its relations with the authorities there and hollowing out the one-China principle. The authorities on the island, led by the Democratic Progressive party, have refused to recognise the 1992 consensus that embodies the one-China principle. They have gone all out to advance "de-sinicisation" and promote "incremental independence".

Against such provocation, it is only natural that China takes necessary measures in response. These measures are aimed at opposing interference from the U.S. in China's internal affairs, restraining the separatist attempts of "Taiwan independence" forces, safeguarding national sovereignty and territorial integrity and upholding peace and stability in the Taiwan Straits. The U.S. side and "Taiwan independence" separatist forces must bear full responsibility for their wrongdoings. Some people may say that by suspending cooperation with the U.S. in certain areas, China is "punishing the world". But China will continue to stand by its commitments to the international community on issues such as climate change. China has the best record of fulfilling its pledges to the world.

The right way for China and the U.S., two major countries, to handle their relations is to respect each other and avoid confrontation. China has made enormous efforts to promote the healthy and steady development of China-U.S. relations, but we will never sit by and do nothing in response to provocative moves that undermine our core interests. The right thing for the U.S. to do is to acknowledge the one-China principle and the three Sino-U.S. joint communiques: stop playing the "Taiwan card"; sever any official ties and military cooperation with the island; and stop creating further crises.

The Taiwan question has always been a sensitive matter at the centre of relations between the UK and China. Our countries began to explore diplomatic ties in the early 1950s, but it was not until 1972 that the relationship was upgraded to the ambassadorial level, with the signing of a joint communique. Full diplomatic relations had to wait until the UK clearly recognised the Chinese government's position that Taiwan is a province of the People's Republic of China, decided to revoke its official representative office on the island, recognised the government of the People's Republic of China as the sole legal government of China, and promised to maintain only an unofficial relationship with Taiwan. This history must never be forgotten and pledges should be honoured.

The Taiwan question is a major issue of principle. There is no reason for the UK to disregard that fact and follow in the footsteps of the U.S.. Calls to "help Taiwan defend itself" and the like are extremely irresponsible and detrimental. Any move that violates the one-China principle and the provisions of the joint communique, or crosses the red line of the Chinese side, will bring serious consequences to bilateral relations. There should not be any miscalculation on this.

Over the past 50 years, the exchanges and cooperation between China and the UK have brought enormous benefits to the peoples of both countries. These hard-won outcomes must be cherished. China-UK relations are now at an important juncture. The Conservative party will soon elect a new leader and the country will have a new prime minister. The trajectory of Britain's policy on China is being followed closely from all quarters. Around the world, daunting challenges, such as the lingering pandemic, the economic downturn, energy shortages and the climate crisis, remain.

Under such circumstances, China and the UK should strengthen rather than weaken their cooperation. The two sides should follow the principles of mutual respect, equality and non-interference in each other's internal affairs, engage in dialogue and cooperation, and join hands to address common challenges. This is the right choice, one that conforms to the fundamental interests of the peoples of both countries.

The author is China's ambassador to the United Kingdom. This article was first published on the website of The Guardian on Aug 16, 2022.